We all have that one friend that “over communicates” with their hands. You know what I am talking about right? If you’re thinking “I don’t have a friend like that,” then there’s a good chance you are that friend ;).

There are 8 primary reasons dogs will put their paw on you.

You have to read the situation to understand which of the 8 reasons it might be. For example, if you’re petting them and stop, they might put their paw on you to tell you to keep going. If it’s around dinner time, they may be trying to remind you it’s time to eat!

Before we talk about why your dog might be pawing you while you are petting them, let’s dispel a big myth. Your dog is most likely NOT trying to be dominant. This is a myth that has been going around for years, and it’s about time this myth comes to an end.

The only time they are trying to be dominant is if they are growling at you while doing so or showing other aggressive behavior. It’s highly unlikely they will do this to an owner that has treated them well.

So Why Is Your Pup Doing This?

There could be a lot of reasons, but the good news is most of these reasons are positive. As mentioned above, dogs use their paws to communicate with their human friends. If your dog is pawing you while you are petting them, there’s a good chance it’s because of one of the reasons below.

They’re Petting You Back

Pretty cute, huh? Dogs are smart, one of the ways they learn to make their human friends happy is by observing. They know they get enjoyment out of you petting them, so they put their paw on you to “pet you back.”

They’re Expressing an Emotion of Love

When a man tells a woman he loves her, the woman will say it back (assuming it’s a healthy relationship). The same thing is going on here. Dogs are pack animals and one way they express love is through touch. So when you touch your dog, your dog might be viewing that as you saying “I love you.” When your dog places his/her paw on you, they might be saying “I love you too.”

If your dog paws you AFTER you pet them, they are telling you “Hey, I really liked that. Don’t stop”. This is only a problem if they start doing it too much. In that case, make sure you don’t reward this behavior by continuing to pet them. But if it only happens every once in a while, it’s nothing to be worried about.

Sometimes a dog pawing you while you are petting them means they would rather play than be pet. You can tell if that’s what they are trying to communicate by looking at their body language? Are they “alert and upright”? Is their tail wagging at a quick pace? If so, they might have a lot of energy at the moment and want to play with you.

If you are able to drop what you are doing and play with them for a few minutes, that will help increase the bond between you and your dog. However, if you are unable to play with them at the moment, do you have a toy you can give them? Or a yard you can let them go run around in to get rid of all that energy?

They’re Trying to Get a Treat

If you’ve taught your dog any tricks that involve their paws (such as shaking hands), they might be trying to get a treat. Using the handshake example, they know that when they placed their paw in your hand, they got a treat. They might think if they put their paw on your lap they will also get a treat.

I know that sounds funny, but dogs can be more polite than we give them credit for! If you sit next to your dog and they raise their paw before placing it on you, they are being polite by inviting you to pet them.

If you don’t pet them and they place their paw on you after just raising it, they’re essentially saying “pretty please.”

I know what you are thinking “when does my dog not want food?”. For some dogs, it can seem like they want food 24/7, but dogs are creatures of habit. If you feed your dog at a consistent time (like you should), they know exactly when that time rolls around.

If your dog is pawing you, check the time and see if it’s dinner time for them. If it is dinner time (or close to), they were probably just reminding you to feed them.

Dogs are full of emotions. They do a great job expressing when they are happy, sad, hungry, excited, depressed, and insecure. If they’re pawing you while you’re petting them, take a look at the rest of their body language. Is their tail tucked? Are they shaking a tiny bit? Are their ears pulled back or down? If so they might be feeling insecure…

…but what could have caused this insecurity?

Think back throughout the day. Was there a verbal fight in your household? Did you lose your temper with your dog? Are you in an unfamiliar place? Has someone been gone for a few days who is usually there?

All these things (and much more) can cause your dog to become insecure or nervous. The best way to help them get through this is to play with them. If you’re playing with them, they will see that you’re not worried about anything, so they don’t have to be worried either.

Should This Behavior Be Stopped?

The only time this behavior should be stopped is if it’s becoming aggressive or if it’s really bothering you.

If it’s not aggressive and it’s not bothering you, then it’s really nothing to worry about. By attempting to stop this behavior (unless it’s because of an attempt of dominance), you are depriving your furry friend of one of their most loving forms of communication with humans.

How To Stop It

Let’s say it’s really starting to bother you or it’s becoming too aggressive and you want to stop it, the best way to stop it is by not paying attention to it. If they place their paw on you, quickly move it off your body and say “no.” Then when they don’t do it, begin petting them. Eventually, they will learn that if they paw you, you won’t pet them. But if they don’t paw you, you might pet them.

It Could Also Mean They’re In Pain

We didn’t include this one in the list above because it should be obvious if your dog is in pain (they’ll be limping around everywhere). But if a dogs leg or paw hurts, they might put their paw on you. This is their way of asking you to take a look and help with the pain. They might have a rock between their pads or a thorn/splinter caught in their paw.  Just give their paw a quick inspection to make sure nothing is wrong. Of course, if they are limping and you can’t find anything wrong, you’ll want to take them to the veterinarian.

Take Advantage of These Moments 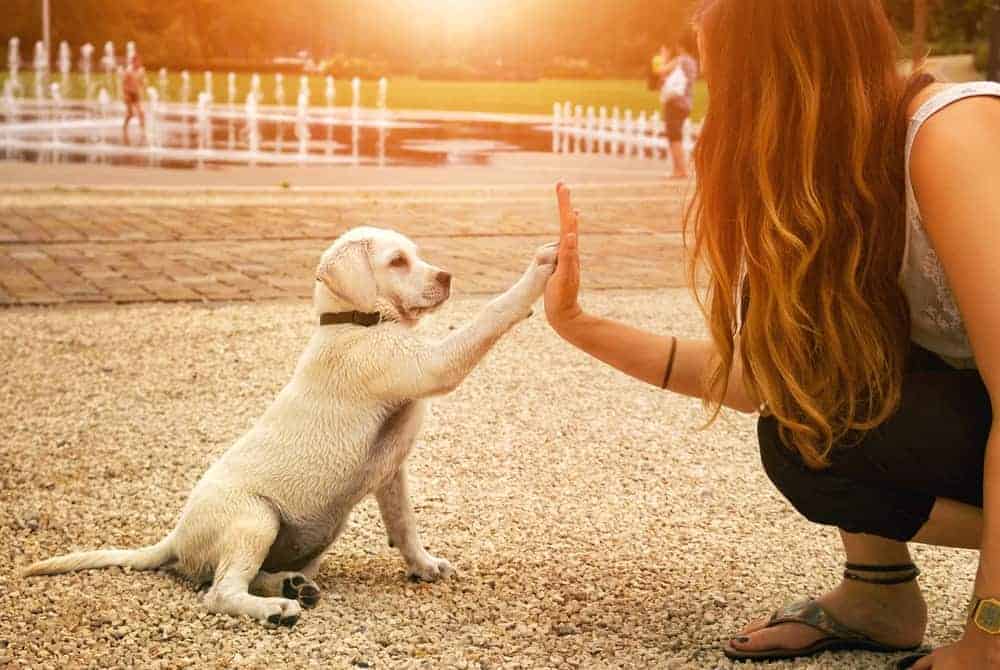 Bonding with a dog is a special thing. It’s even more special when they put in the effort to express their love to you as well. As you can tell, most of the reasons given above were all very positive and signs of your dog trying to communicate affection.

Take advantage of these moments. They will build trust and help you and your dog develop a strong bond. There’s a reason dogs are called mans best friend! They can form a relationship with humans like no other animal.