Whether it be under the blanket, your arm, or the bed sheets, there are several reasons dogs bury their heads. This behavior could be because of stress, fear, weather, sleep, or even empathy. Some dogs also like to bury their heads under something when they’re in a playful mood. 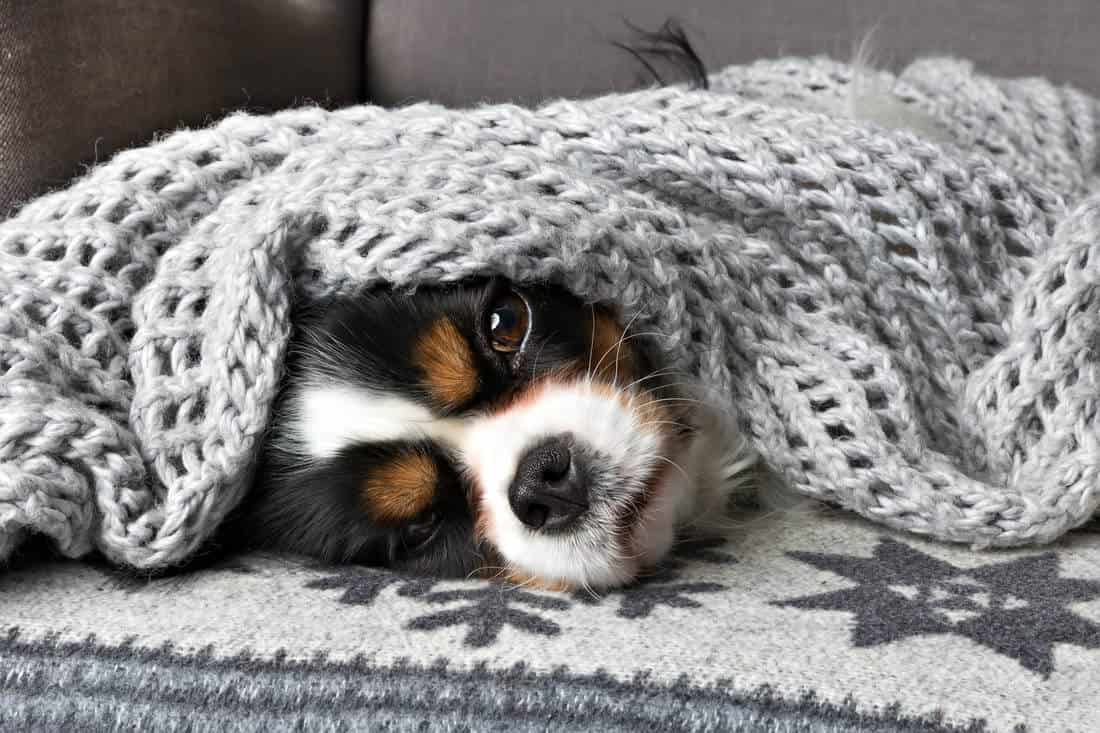 Has your dog ever buried their nose into your side? Or maybe you had a blanket on your lap and they decided to burrow their head under the blanket? As odd as this behavior may seem, it’s completely normal and something nearly every dog does.

If you’re wondering what those reasons are, here are the seven most common reasons dogs bury their heads.

They Enjoy The Scent

Dogs have an incredible sense of smell. In fact, their sense of smell is how they explore the world. So when your dog enjoys the scent of something, they may bury their head to enjoy the scent even more.

Although less common, some dogs will burrow under the arms of someone they just met. This is their way of getting to “know” the smell of this new person.

When newborn puppies feed, they bury their heads into their mothers stomach. This instinct may continue later in life when they get hungry. This could be the dog’s way of saying “I want some food.”

Short-haired dog breeds (such as pugs and boxers) have a tendency to get cold quickly. As a response, they may bury their head (and sometimes body) into their owner or a blanket in an attempt to warm their body temperature.

In the wild, packs of dogs also learned to huddle against one another to survive harsh winter months. Although your dog is no longer out in the wild, the instinct to “huddle up” is still there when they get cold.

It has also been presumed that dogs can understand and tune into human emotion. Service dogs are a great example of what it means to tune into their owners’ needs.

Some dogs will try to relate to your emotions. If they sense you’re feeling sad, they might “feel sad” with you. In some instances this would be portrayed by burying their head.

During interactions with other dogs, your pet may gently nudge the other to show submission. In a more aggressive fashion, this can be seen as a show of dominance.

Dog’s may do this to their owner as well.Burying their head into you as you try to walk past them, followed by barking or growling, can be your dog’s way of trying to show their dominance.

Dogs like to mark up territory with their scent. When we think of a dog “marking their territory”, we often think about them urinating on the spots they’re claiming.

However, dogs also carry a lot of scent on their faces. When a dog is burying their head into you, it may be marking you as their territory to show other animals your affiliation to them. This is more common in male dogs as they have a greater desire to claim dominance and ownership over people or other dogs.

While it may seem reasonable to reciprocate the hugging and cuddling, doing so can actually cause a lot of stress for your dog. They may become uncomfortable if you nuzzle them back. They are instinctually driven to be able to run to protect themselves, so if they feel unable to move, this can cause anxiety.

Instead of making them feel restrained, you can make your pup feel safe by rewarding them with small pats or treats when they nuzzle into you. Paying close attention to the reactions they have to what you’re doing can help you gauge what they like and dislike as all animals are different.

One dog may enjoy having their body wrapped in between their owner’s arms while another may enjoy burrowing for safety but feel on edge when an arm or blanket is draped over them.

Things can get a bit dangerous for dogs that are “excessive burrowers”. They might bury themselves under multiple layers of blankets and get stuck. Unfortunately, if the dog is unable to escape, they may suffocate.

This is especially important for brachycephalic dogs (dogs with a short nose such as boxers) because they naturally have breathing issues. If you notice your dog panting or drooling excessively or their pulse is racing, remove the blankets immediately and monitor them for further issues.

For the most part, dogs do a good job at regulating their own temperature and know when they need to escape the heat, so letting them decide when they need more or less warmth can help your animal stay safe.

How to Know Why YOUR Dog is Burying Their Head

We went over seven reasons dogs bury their heads, but how do you know which of the seven reasons applies to your dog? Is your dog showing signs of affection? Are they trying to leave their scent? Are they being aggressive?

It can be hard to know exactly what your dog is trying to tell you in the moment, but paying attention to the rest of their body language and being aware of the situation can help solve the mystery.

Dogs have limits in how they can communicate with humans, so it takes a conscious effort to tune into the signals they are providing for us to tell whether they anxious, curious, or simply looking to be close to us.