Where Do Dogs Like To Be Pet? And What Areas Should You Avoid?

One thing that brings all dog owners pure joy is snuggling up on the couch with their dog and giving them a good petting. But do dogs enjoy being pet as much as we think they do? And if so, where do dogs like to be pet? Are some spots better than others or do most dogs enjoy being pet anywhere?

Most dogs like to be pet just about anywhere, but they also enjoy being pet on some spots more than others. Behind the ears, upper chest, the back, and a good belly rub are the best spots to pet a dog. However, each dog is different and will have their own unique preferences.

In this article, we are going to break down everything you need to know about petting a dog. But before we begin talking about how to optimally pet a dog, we first need to figure out if a dog wants to be pet in the first place! 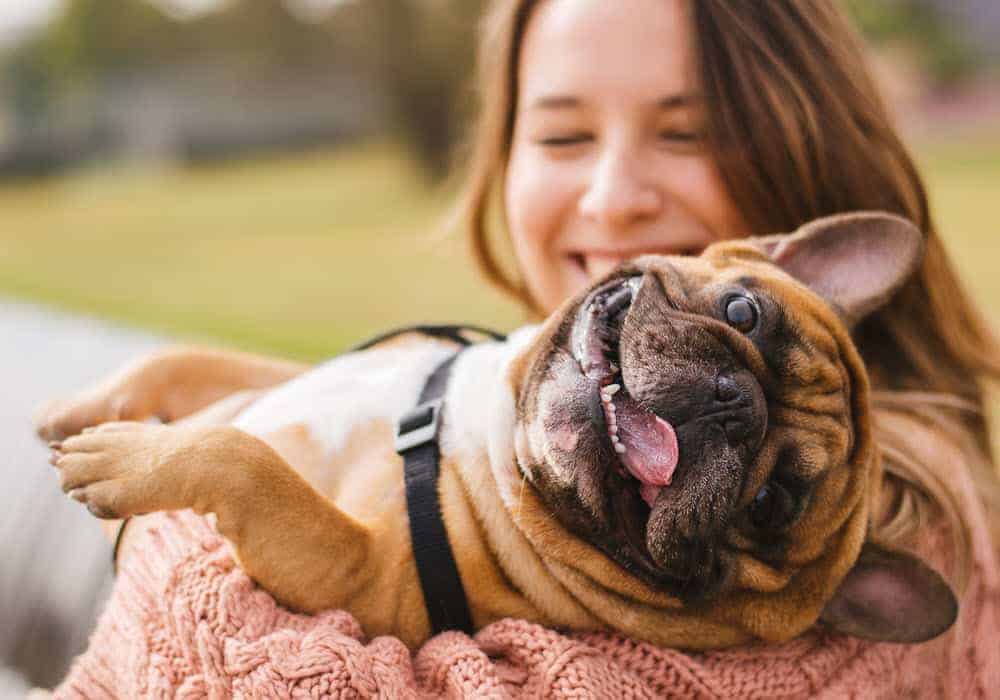 Believe it or not, some dogs flat out don’t like being petted. Crazy, right? We always assume dogs live for being fed and getting their belly rubbed, but some dogs don’t like it as much as we think.

If you’ve owned your dog for a few months, you probably already know whether or not they enjoy being pet. But in case you got a new dog or are around a dog you don’t know very well, here’s how to tell if they want to be petted.

They Don’t Enjoy it if They…

They Do Enjoy it if They…

Now that you know how to tell if a dog enjoys a petting session, you’re probably wondering where a dog enjoys being pet the most. Before we get into that, let’s go over some basic “petting 101”. If you don’t follow these rules, it can cause a dog to become fearful and view petting as a form of aggression instead of a form of affection.

If you’ve just been introduced to a new dog, you need to take time to build trust with the dog. Most people will stand right next to the dog and bend at the waist, hovering right over the pooch. This is the incorrect way to approach a new dog. You want to be as non-threatening as possible, and hovering over a dog that doesn’t trust you yet can be perceived as a threat.

Instead, squat down and get on their level. Once on their level, extend your hand slowly so they can sniff it. If the dog comes to you, they’re ok with being pet. If they shy away from you, they just need a little more time around you to build trust. The more you try to force the petting, the longer it will take to build trust.

Pet With The Fur – Not Against

When petting a dog, make sure you pet with the fur and not against it. This may sound obvious, but we often make this mistake without realizing it. When we stroke back and forth on the fur without lifting our hand each time, half the time is being spent petting against the fur.

It’s ok to pet behind the ears and on top of the head, but avoid the snout and around the eyes. Most dogs find this annoying, and since dogs have a sensitive nose it can cause pain if you pet too hard.

Always make sure children are being supervised when petting a dog. Most children have good intentions, but they tend to either slap the dog when petting or accidentally poke the dog’s eyes. This could result in the dog becoming aggressive and snapping at a child.

This one is required, but if you want to make your dog feel EXTRA good when petting them, praise them while you pet them. Tell them how good of a dog they are and how much you love them. Watch their tail begin to wag uncontrollably when you do this!

The Best Places To Pet a Dog 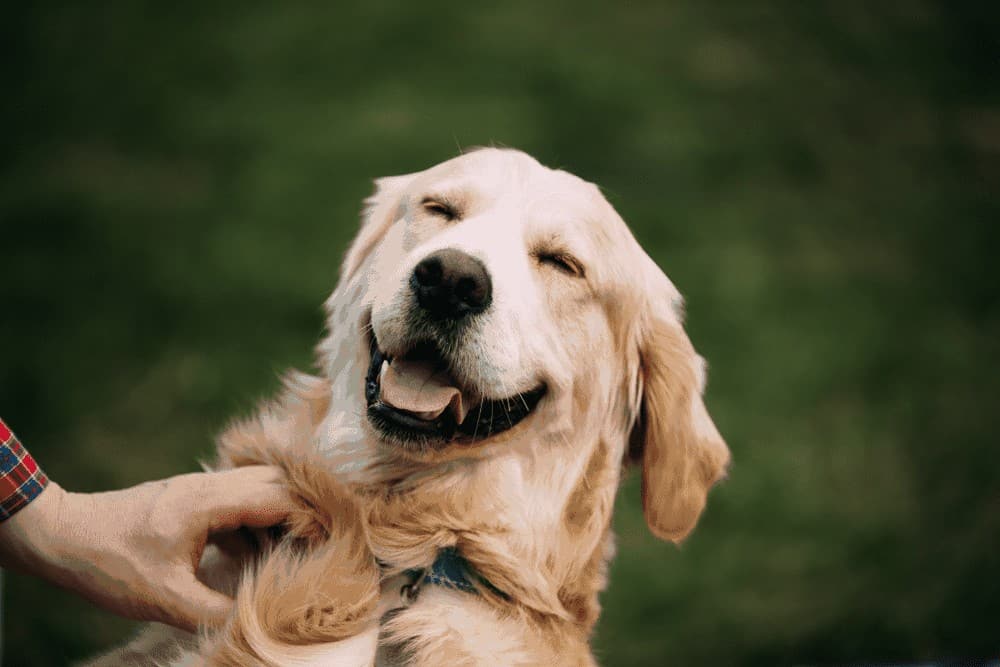 Assuming you have a good relationship with your dog, very few spots are “off-limits”. As long as you’re showing some type of love and affection to your pooch, they’ll be one happy doggie. However, just about all dogs have certain spots they like being pet more than others.

Remember, all dogs are unique and have their own preferences. You’ll notice we didn’t include legs in the list below, but that could actually be YOUR dog’s favorite spot! Make sure you experiment with where you pet them and watch their body language to determine how well they responded to being pet in that area.

Dogs ears contain a large number of nerve endings that reach internal organs. This means when you pet a dog behind the ears, they’ll begin to feel completely relaxed and might even fall asleep.

In fact, a recent study done by Dr. Allen Schoen showed that when a dog is pet behind the ears, their brain will release the same endorphins that humans release when experiencing the “runners high” from exercising.

This means that if your dog is stressed, nervous, or you need to calm them down, spend some time petting them behind the ears.

If you’ve just met the dog, the best place to bet him is the upper chest. Remember how we talked about not hovering over a dog earlier? The same is true with reaching over them. The second your hand goes over their head, they lose vision of it and have no idea what you’re going to do with that hand.

When you pet them on the chest, they’ll be able to see your hand the whole time. On top of that, it gives them a chance to sniff your hand or arm while you pet them. This sniffing process is important for them to get to know you.

If your dog wears a collar (which they should), petting under the collar will feel really good! This is an area that doesn’t get much attention. The collar can cause some irritation, so dogs generally love a good scratch under the collar.

It’s rare to meet a dog that doesn’t love a belly rub! You’ll notice some dogs ask for it by rolling onto their backs when you pet them. They aren’t submitting to you, they’re simply asking you to rub their belly.

Science isn’t clear on why dogs love belly rubs so much. The leading theory right now is that the hair follicles on the belly are extra sensitive, so stroking the hair on the belly feels good for the pooch.

Another reason could be that dogs don’t grow as much hair on their belly, so that’s the closest you can get to scratching their skin.

Although the science isn’t clear on the explanation, it is clear that just about all dogs love it!

This is the most common spot to pet a dog. As long as the dog either already trusts you or is friendly to strangers, there’s nothing wrong with petting a dog on the back. Although it may not feel as good for them as a belly rub or a scratch under the collar, they’ll still love the attention and bonding.

The Worst Places to Pet a Dog 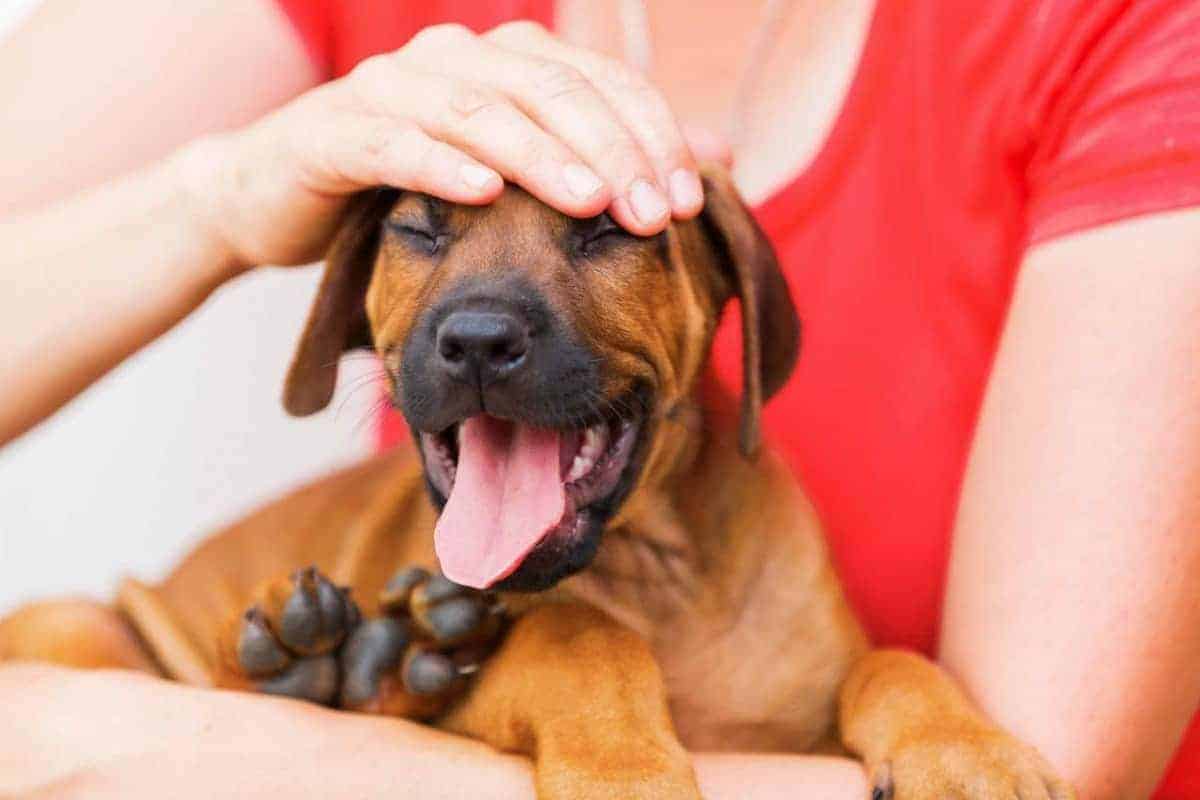 Dogs rely on their legs to escape from danger. When someone pets their legs or paws, this might make them uneasy because they don’t want their “way of escape” to be taken from them.

Most dogs would prefer you not to touch their tail. The tail plays an important role in how dogs communicate with each other and how they communicate with humans. Imagine if someone took away your ability to speak, this is how a dog may feel when we pet their tails.

Some dogs don’t mind being pet on the head, but a lot of dogs don’t like it. You can tell if your dog doesn’t like it if they “duck” and close their eyes as you touch their head. The reason for this is because dogs don’t like it when you go near their eyes and nose. Although they rely more on their nose to explore the world around them, it still hurts to accidentally get poked in the eye!

Listen to Your Dog’s Body Language

The secret to knowing where your dog likes to be pet is to simply listen to their body language. A good down owner will eventually learn where they should pet their dog if the dog is stressed, happy, scared, and so on. A good sign they like being pet where you are petting them is when their tail wags or when they nudge at your hand after you stop.

The good news is that dogs are incredibly patient with us humans. Even if we pet them somewhere they prefer us not to touch (like the tail), they still know we love them and are showing affection.