Getting a new puppy is such an exciting time in life, but we often get so excited that we forget to ask ourselves some important questions before choosing a dog. One of the questions is how to handle your female dog while they are in heat.

Once your female dog enters heat for the first time, you’ll quickly learn that there’s more to it than you thought. How should you take care of them during this time? How often does it happen? How long does it last? Is there any way to stop it? Today we will be answering all your questions regarding dogs in heat.

What Does it Mean When a Dog is in Heat?
Female dogs that are not fixed will go through a heat cycle 1-4 times per year. During this time, her body is primed for reproduction and she can become pregnant. There are 3 stages to the heat cycle, lasting a total of approximately 21 days.

Most sources will tell you that dogs go into heat two times per year, but the truth is that’s not 100% accurate for all dogs. The amount of times a dog goes into heat per year depends on its size. On average, small breeds go into heat every four months, medium size breeds every eight months, and large and giant breeds once per year. It’s important to know how often your dog will go into heat so you have a better understanding of how often your dog will need special attention…and yes, until you get your female dog spayed, they’ll need more attention during their cycle than you think…especially if you have a male dog in the house!

When To Expect The First Estrus (or Heat) Cycle

Now that you have a better understanding of how often you can expect your dog to go into heat, the next question is when you should expect the first cycle.

Again, it depends on the size and breed of the dog. It depends on when they reach sexual maturity. In most dogs, this will happen between 8-18 months.

The Three Stages of Heat

Every dog owner that doesn’t get their dog spayed should understand the three stages of heat. Even if your dog does undergo spay surgery, they can still show signs of heat for the first few months. For those that want to breed their dog, understanding these stages is essential to increase the chances of pregnancy. Those who don’t want to breed their dog, understanding these stages are important to make sure you can prevent pregnancy. When a dog is in heat, it’s called the estrus stage. The estrus stage is broken down into three different categories, they are as follows:

The first stage is the proestrus. This is when the dog’s body gets ready for reproduction. The eggs begin to mature, and estrogen levels are high. This is also when you may start to notice a bloody vaginal discharge. This stage lasts about nine days, and during this phase, the female will not allow another male dog to engage with her.

This is the actual mating phase that most people think of when they think of dogs in heat. During this phase, progesterone levels go up, and she may raise her tail at other male dogs, letting them know she is receptive to mating. This stage also lasts about nine days and is the only time pregnancy can occur.

The final stage is the diestrus stage. This is when the female is either pregnant or not and lasts about 58-60 days. During this time, a female dog will not allow another male dog to mate with her regardless of whether or not she is pregnant.  During this time, it may seem like your pet is sick, this is normal and usually something that shouldn’t cause concern.

How Will I Know a Dog is in Heat?

Learning the signs of the proestrus phase (first phase) is important for dog owners. It doesn’t do much good to look for signs of the second and third phase. By that time, it may be too later to either help or prevent a pregnancy.

Here are the top signs of the proestrus phase: 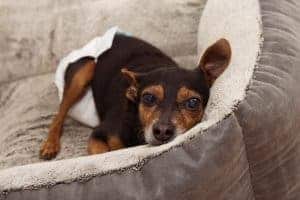 Bleeding From The Vulva

The first sign you’re probably going to notice is bleeding from the vulva. Some dogs do a great job cleaning themselves during this phase, so you may need to pay close attention to them at first. If they are laying on their bed, immediately take a look at their bed and check if there are any red spots.

Dogs that enter the first stage of heat often become restless. They know a lot of changes are going on in their body, and those changes can sometimes cause anxiety.

On the other hand, those changes can also cause laziness. Either way, you want to look for a significant difference in one direction or the other. If your dog hasn’t become restless or extra lazy, they probably aren’t going into heat quite yet. Pet owners need to be aware of their dogs normal energy level. This will make it much easier to determine if your dog is more restless or lazy than usual. It’s also good to be aware of your dogs energy level for overall pet health.

The female body isn’t quite yet ready to reproduce during this first phase. However, male dogs are still extremely attracted to female dogs in this stage. Since the female isn’t ready to mate yet, she may become aggressive towards male dogs that make an attempt.

The uterus needs to be prepared to support life before getting pregnant. During this stage, the cells within the uterus will increase in size, causing swelling of the vulva.

Again, the body needs to get ready to support a pregnancy. This means it requires an increased nutrient supply. Your dog is essentially “eating for two” at this point even though she isn’t pregnant yet.

Those are the top signs of a dog entering the first stage of heat. Bleeding is the dead giveaway, but if you have a dog that does an excellent job cleaning themselves, you may not notice the bleeding right away. When you notice the other signs, you know it’s time to pay closer attention to looking for a bloody discharge.

When Does a Dog Stop Going into Heat?

Unless your dog is spayed, they will never stop going into heat. Human females go through menopause, usually between the ages of 45-55. Dogs, on the other hand, do not experience this. Unless spayed, they will continue having their cycle throughout their whole lives.

However, if you are a breeder, this does not permit you to breed them the rest of their lives. Pregnancy late in a female dog’s life can be dangerous for both her and the pups.

There are four common issues when it comes to females in heat. We will go over each one below.

We went over the most common signs of heat in dogs, but when your dog is going through silent heat, those signs are difficult to detect.

It’s normal for smaller breeds to go through silent heat before they have their first normal heat cycle. You have to be careful during silent heat because even though the signs aren’t there, she can still get pregnant.

This isn’t quite as common as silent heat and can cause a great deal of confusion. Split heat is when a dog will begin the first phase of her heat cycle, then goes out of heat, and finally returns to the second phase 1 week to 2 months later.

If this happens once or twice, it’s nothing to be concerned about. If it’s happening regularly, a trip to the vet may be required.

If a female dog has higher levels of estrogen, it can lead to a prolonged heat that lasts longer than their normal heat cycle would. If your dog is experiencing prolonged heats, it could mean the increase in estrogen is being caused by an ovarian cyst or granulosa cell tumor. Your dog may need surgery, so a trip to the vet is required.

Absent heat is the most common abnormal heat issue. This is when a female dog completely skips their heat cycle. This common for dogs that are under 2, but dogs that are older than 2 years of age should be consistent with their cycles.

If you recently adopted a dog and she hasn’t had her cycle yet, take her to the vet to see if she has been spayed. A spayed dog will not go through a heat cycle.

If the dog hasn’t been spayed, there are several reasons she might be experiencing absent heat cycles, the most common of which is malnourishment.

If a dog is not spayed and still isn’t experiencing heat cycles, consult with a vet to see what could be going on.

Do I Need to Separate My Dogs? 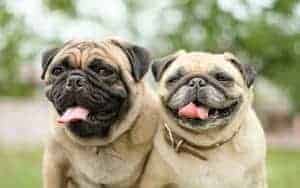 If you have both a male and female dog in your home, it’s best to separate them while the female dog is in heat. Even if you are planning on breeding and want your female dog to get pregnant, she will be very aggressive toward the male dog until the estrus cycle (second stage).

However, the male dog will be trying to make advances right when she begins her first stage. Since the first stage can last about 9 days, that’s a long time for a male dog to be denied primal instincts. Neutering the male dog might help, but there will still be natural instincts that take over.

Part of being a responsible dog owner is being prepared for all situations. Now that you have a better understanding of how often dogs go into heat (on average twice per year, but will vary from dog to dog), the signs to look for, and some of the most common heat abnormalities, you’ll be adequately prepared to take care of your dog when she begins her cycle and prevent accidental pregnancies.