Now before you panic and assume something is wrong with your dog, just because something COULD be wrong doesn’t mean something is wrong. Some dogs drink a lot more water than usual during special circumstances. This is especially true if the weather is getting warmer or if your dog has been more active than usual.

How Much Water is Normal?

The only way to know if your dog is drinking an excessive amount of water is to know much much water is normal for your dog.

Most studies show that a healthy dog will drink around ½ to 1 ounce of water per pound of body weight. This doesn’t mean your dog will drink that exact amount of water. If they are slightly under or slightly over, it’s nothing to worry about.

On the other hand, if they drink much more than 1 ounce of water per pound of bodyweight regularly, this is cause for concern. The first time I read that my dog should be drinking ½ to 1 ounce of water per pound of bodyweight, my first thought was “that’s not helpful!”. That creates a huge variable. For a 50 pound dog, it can be as low as 25 ounces and as high as 50 ounces.

In my opinion, that’s too big of a gap. Instead of blindly trusting the golden rule, it’s best to figure out how much water YOUR dog needs on a daily basis.

This is where the water bowl routine comes in hand. It’s best to do this when your dog is drinking a healthy amount of water as it will make it easy to determine if there’s been a change in drinking habits.

Start by filling your dog’s water bowl up with fresh water first thing in the morning. Keep a close eye on it throughout the day and fill it up again right when the bowl is empty.

Count the number of times you had to fill up the water bowl during the day. Do this every day for 14 days straight. This will give you a good idea of how much water is normal for YOUR dog to drink.

Knowing this number will make it much easier to notice any change in drinking behavior in the future.

What Could Be Causing Excessive Drinking? 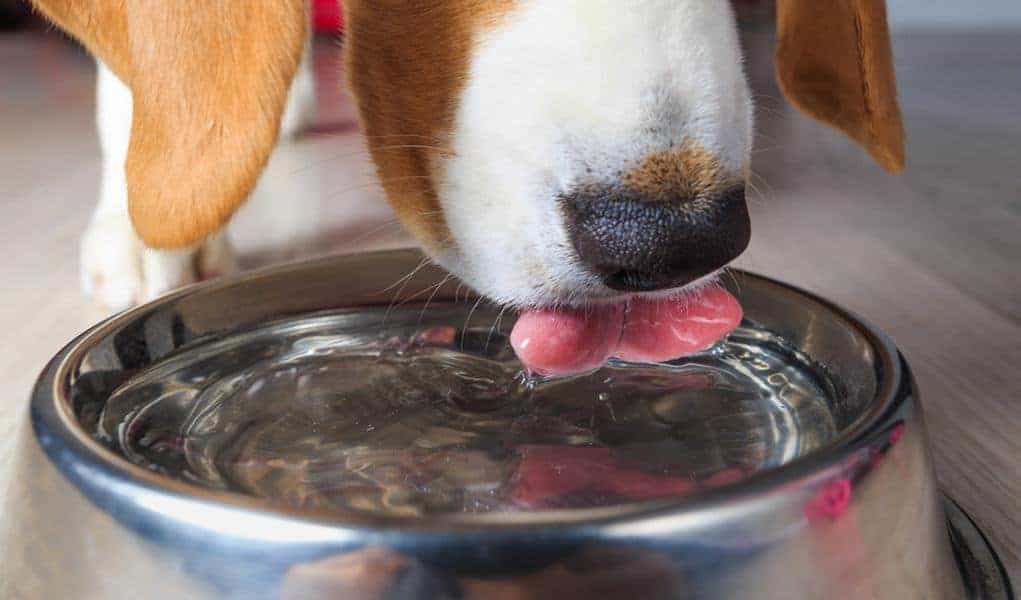 Now that you’ve officially determined your dog is drinking too much water, the next step is to figure out why. Sometimes figuring out the “why” and making small changes is enough to fix the issue. Other times it won’t fix the problem, but at least you’ll know what’s wrong and have a plan of action to fix it.

We are going to split this up into two sections. Non-medical and medical. Be sure to read through both sections with an unbiased attitude. Take all these factors into account before assuming the worst.

Dehydration: Let’s start with the most obvious. Several factors could cause your dog to become dehydrated. Warmer weather will cause excessive panting. The more a dog pants the more water they lose.

If your dog has been laying out in the sun as some dogs like to do, this will cause them to lose water which will make them thirsty. Or if you’ve recently introduced a new dog into your family and the two dogs have been playing all day, this can cause dehydration. In this case, increased water consumption is a good thing.

Change in Diet: This is another common reason a dog will drink an excessive amount of water. Dogs are creatures of habit; when something new enters their diet, it can cause significant changes in the body. If you’ve recently changed your dog’s food or have been giving them new treats, they might be taking in more sodium than they’re used to. Sodium causes thirst in dogs just like it does in humans.

If you made the switch from canned (wet) dog food to dry food, this can also lead to an increase in thirst.

Stress/Nervousness: One way dogs handle stress is by licking their lips. When they continuously lick their lips, their mouth becomes dry, which makes them drink more water. Did something significant happen recently that could be causing your dog to stress? A fight in the household? Someone moving away? A new house? Many things can cause stress/anxiety for your dog. It’s good news if this is causing the excessive drinking because it will naturally go away with time.

Behavioral Issues (Jealousy): We don’t think of our dogs as being emotional, but dogs are very emotional creatures. This includes jealousy! When you get a new animal, your dog may drink all the water to prevent the new one from being able to drink. 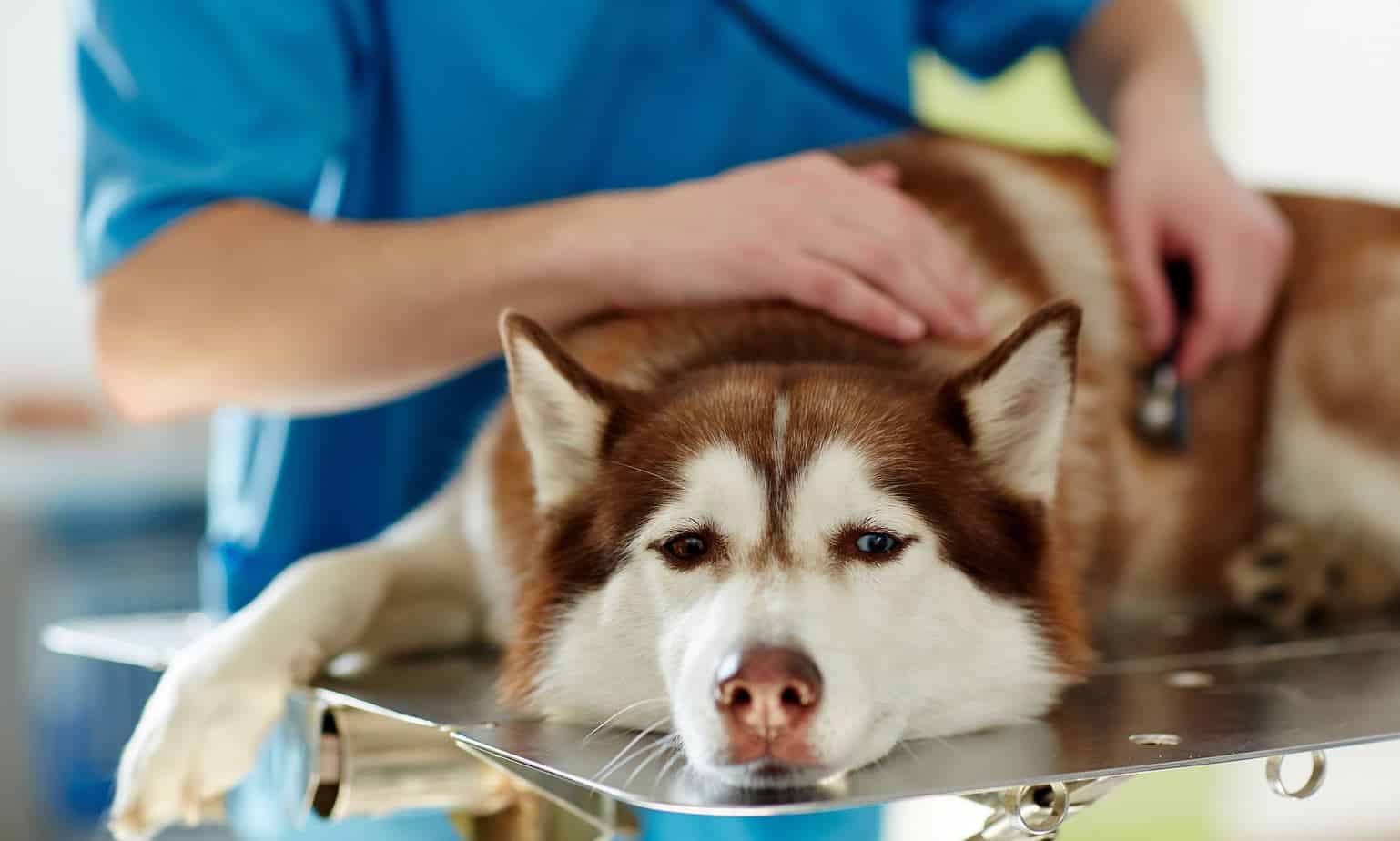 Now time for the “not so fun” part. Nobody wants their dog to develop health problems. Unfortunately, this can happen even if you’ve been the perfect doggy parent. Below we will go over some of the most common medical conditions that will cause your dog to drink an excessive amount of water.

Fever: This is the “best case” out of all the medical causes. Your dog might feel horrible during a fever, but it should go away within a matter of days. Think back to the last time you had a fever; you probably drank more water than usual.

When your dog has a fever, the body’s number one priority is to lower body temperature. It does this by depleting the cells of some water in an attempt to cool down the body temperature. The result of this is excessive thirst to replenish the depleted cells.

Diarrhea/Vomiting: Both these things cause your dog’s body to lose a massive amount of water quickly. When water is lost so fast, extreme thirst will develop. Drinking habits should return to normal within 72 hours.

Kidney Failure: This is a severe condition and is much more common in older dogs. Kidney failure will cause polyuria (excessive thirst and urination), which means your dog will need to drink more water to stay hydrated. One of the main symptoms of kidney failure is blood in the urine. Other symptoms include lethargy, depression, and lack of appetite. If you notice this, make an appointment with your veterinarian ASAP.

Diabetes: Although diabetes is a serious medical condition for dogs, it’s not nearly as serious as kidney disease. Diabetes mellitus will cause a sudden and drastic increase in blood sugar levels, a side effect of this is dehydration. As we already know by now, dehydration causes excessive thirst.

Cushing’s Disease: This is another disease that is much more common in older dogs. It occurs when the adrenal gland produces more cortisol than usual. A small benign tumor on the pituitary gland usually causes this.

Many other medical and non-medical conditions could be causing an increase in water intake. Regardless of what you think the cause may be, if your dog is drinking more water than usual on a regular basis, a trip to the vet is required.

What Not to Do

There are two common mistakes people make when their dog is drinking too much water. Make sure you don’t make either of these mistakes!

Don’t Stop Them From Drinking Water

It makes sense to try to stop your dog from drinking too much water. You’re probably getting tired of the increased urination. However, your dog has increased thirst for a reason! Never limit the amount of water your dog wants to drink. This could lead to dangerous levels of dehydration.

Until you figure out what’s going on and put together a plan with your vet, let your dog drink as much water as their heart desires.

Don’t Assume it Will Fix Itself

Sometimes it might fix itself, other times it won’t. If something is medically wrong with your dog, it’s important to get the diagnosis as soon as possible. Even if you only wait a week, it could life threatening. When it comes to potential medical issues, it’s always best to be more cautious.