It can be really confusing when your dog eats their food but won’t drink any water. Most information on the web talks about what you should do if your dog stops drinking AND eating…but what if your dog’s appetite for food continued, they just dog refuse to drink water?

My Dog is Not Drinking Water But is Eating
If your dog won’t drink water but will eat food, several things could be going on. The most common is a bladder or urinary tract infection that’s causing them to lose their desire for liquids. However, that’s not the only reason (more on this later). Whatever the reason may be, it’s vital to get your dog drinking water again.

This issue needs immediate attention because a dog’s body is 80% water! Without proper water intake, the major organs will begin to fail. To make it worse, dogs become dehydrated much faster than humans because they don’t have sweat glands to help cool them off. Instead, they cool down through panting, which causes them to lose water at a rapid pace.

In this article, we are going to go over some of the reasons your dog won’t drink water but will eat. Because of how severe this issue is, if it persists, take your dog to the vet as soon as possible.

Reasons a Dog Won’t Drink Water But Will Continue Eating

Since dogs don’t think as rationally as humans, they have a strict fight or flight system. When something happens that causes fear or makes your dog think they may be in danger, they’ll either fight it or stay away from it.

Your dog may not be drinking water because something happened that caused a negative association with either the water bowl or the area where the water bowl is located. It could be as simple as a loud noise that scared them when drinking water or a particular smell in the location that reminds them of something they’re afraid of.

This might sound silly, but without this strict fight or flight system, dogs out in the wild would be dinner for a predator.

The Fix: Change the location of the bowl. If that doesn’t work, then purchase a new bowl.

Most dogs don’t mind drinking dirty water. Heck, if you’ve owned multiple dogs, you’ve probably had one that drank out of the toilet. But some dogs are picky eaters and drinkers. If the water bowl has some dirt or debris in it, your dog may be waiting for you to replace the water.

The Fix: Either clean the bowl or get a new one.

If you’ve recently moved or had a water filter replaced, there’s going to be a slight change in the smell and taste of the tap water. As you all know, dogs have a much better sense of smell than humans. If they smell something in the water they aren’t used to, this might cause them to avoid drinking it.

The Fix: Try pouring some bottled water into your dog’s bowl. If they drink bottled water, you know the issue is with the water you’ve been providing them with. 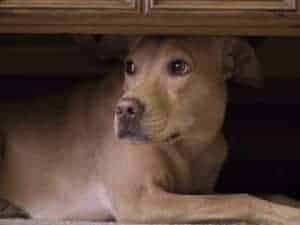 Think back to the last time you were super stressed and anxious. Did you have any desire to drink water? I know I sure didn’t! Sometimes we get so stressed we start to feel sick to our stomachs. The same is true with dogs. If they are going through a stressful time, they may cope with it by continuing to eat their food but avoiding water.

The Fix: Dog owners know their dog’s best, you should be able to figure out if they’re stressed. Figure out what might be causing the stress. If it’s something you can’t quickly fix, keep them calm by slowly petting them and talking gently to them.

Bladder and UTI infections are painful. When a dog has an infection in either of those locations, it’s going to hurt when they urinate. To avoid pain, they may try to hold in their urine for as long as possible. Not only is this horrible for them, but it causes them to lose any desire to drink more liquids. They won’t completely abandon water, but the amount of water they drink will be greatly reduced.

The Fix: Unfortunately the only fix for this one is to visit the vet. A bladder and UTI infection will usually require prescription medication.

Things We Can Rule Out

When trying to figure out why your dog won’t drink water, not only is it essential to think about what the cause could be, it’s also important to begin ruling things out. If your dog continues to eat food but is ignoring the water, there are a few things we can rule out.

If there is a cut or sore in your dogs mouth, or if they are having pain in their teeth, they wouldn’t be eating food. It’s more painful to eat than it is to drink water.

One of the common reasons dogs stop drinking as much water is if they have become lazy and don’t exercise as much. However, this doesn’t mean they will completely abandon the water bowl. Eating should make them thirsty enough to drink, especially when eating dry kibble. As dogs age, they become more lethargic. If you have an older dog, you may want to consider moving the water bowl close to their bed.

Take this point with a grain of salt because there are a few illnesses that will cause a dog to continue eating but eliminate drinking water. But as a general rule of thumb, when a dog is ill they’ll continue drinking enough water but refuse to eat. It’s rare for a healthy dog to refuse food.

If you do some research on why a dog won’t drink water, those three will continue to pop up over and over again. Yes, they are indeed very common reasons your dog will stop drinking water, but NOT common if they are continuing to eat.

Quick Fixes to Rehydrate Your Dog

Sometimes it’s good to put a “band-aid” on things while you’re trying to get to the bottom of the issue. In this case, you want to make sure your dog stays hydrated while figuring out why they stopped drinking water in the first place. It may take some time to figure things out, so keeping them hydrated in the meantime is vital. 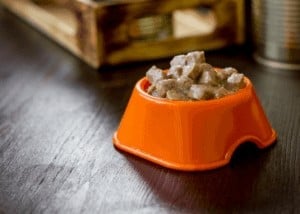 Since your dog is continuing to eat, it would be smart to mix some wet dog food with their kibble. If they’re willing to eat strictly wet food without the kibble, that’s even better! Even though a can of wet food isn’t enough to keep your dog hydrated, it’s better than nothing for now. Keep in mind feeding your dog anything new could cause stomach issues, so keep a close on your pup shortly after feeding them.

Along with wet dog food, you can also feed them small amounts of snacks that are rich in water such as watermelon. However, it’s essential to do your research on this beforehand because some water-based foods (such as grapes) can be poisonous for dogs. When in doubt, do your research before feeding. You can even trick some dogs into thinking ice cubes are a snack. There’s no greater water rich snack than an ice cube!

Add Flavored Electrolytes To The Water

Did you know you can make your own electrolyte water for your dog? And the best part is most dogs LOVE the flavor…probably because there is sugar. Who doesn’t love a sugary drink?!

Here’s how simple it is. Add one tablespoon of sugar and one teaspoon of salt per quart of water.

If you want to make 2 quarts of electrolyte water, the recipe would be as follows:

If your dog drinks this, you can have peace of mind knowing that not only are they drinking water, but it’s full of electrolytes which will help replenish them even more.

Make sure you still put in the time to get to the bottom of the issue though! Since this water does have sugar, you don’t want to make it the primary source of water your dog drinks.

Change The Water Bowl and Location

At the beginning of this article, we talked about how the dog may not drink water because they might have either created a negative association with the water bowl or the location. Purchase a new water bottle and see if that fixes the issue. If it doesn’t, then change the location of the bowl. If neither of those work, at least you can rule out this possibility.

Now that you know how to keep your dog hydrated when they are refusing to drink water, it’s time to figure out what exactly is going on. We listed some of the potential causes along with a way to solve each one.

If the issue continues, your only option is to seek the advice of a vet. They will want to run a few tests to see if there may be health issues such as a kidney disease.  They may also recommend other at-home solutions you can try that we haven’t covered in this article.

You’re already aware of how important water consumption is for any living creature. If your dog isn’t drinking much water, look for the signs of dehydration. Make sure you don’t take this situation lightly. Give the above methods a try, and if nothing works, a visit to the veterinarian is the next step.