If you’ve owned your dog for over a year now, you should be aware of most of their behavioral problems. However, one problem you might not be aware of is that they constantly bark while you are gone. In fact, the only reason you may have found out about it is because your neighbors finally got fed up with it and left a note on your door.

If you have a dog that won’t stop barking when you leave, you aren’t alone. The good news is once you get to the root of the issue, it can be fixed (although it may take some time).

We have a three step process we use when trying to get a dog to stop barking when the owner leaves. The steps are as follows:

The first step is crucial. Knowing why your dog is barking when you leave makes it much easier to fix. The second step is like a “bandaid” for the situation. It’s not a long term fix, but it can temporarily quiet your dog. The third step is the long term fix. All three steps are essential when trying to get your dog to stop barking when you leave.

Step 1: Reasons a Dog Barks When You Leave 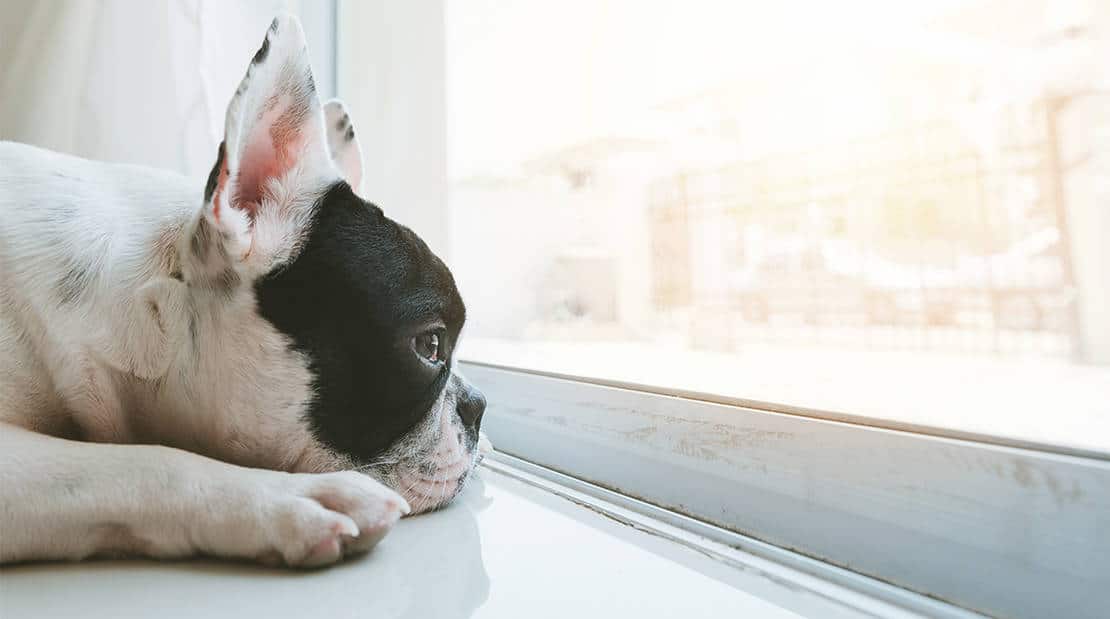 A relaxed and content dog won’t bark when you are gone. Other than playtime, dogs only bark when they are uneasy or unsure about something. If your pooch is barking when you leave, that means they are likely uneasy about one of the following:

Dogs are pack animals, and each pack has an alpha. They look to the alpha for protection and guidance. If your dog views you as the alpha, they might be afraid that when you leave, you’re never coming back. In this case, they bark to try to get you to come back to the pack.

They View Themselves as Alpha

On the opposite end, some dogs view themselves as the alpha. An alpha dog knows it’s their priority to protect the rest of the pack. They don’t know what dangers are lurking outside, so when you leave, they are “commanding” you to come back for your own protection.

It’s In Their DNA

Some dogs were bred to bark any time they see another animal. This comes in handy for farmers who want to be alerted of a fox or coyote, but can be annoying for everyone else. Unfortunately, the three step process won’t work in this instance. Since it’s in their DNA to bark at other animals, the only thing you can do is prevent them from looking outside by covering all the windows.

Pack animal mentality means dogs don’t like to be alone. They can get bored quickly and want to hang out with someone else. In the wild, when a dog gets lost, both the lost dog and the pack will begin to howl, hoping that will help them find each other.

When your dog barks, that might be what they are trying to communicate. In a way, they may feel lost and are calling out to their pack, letting everyone know where they are. 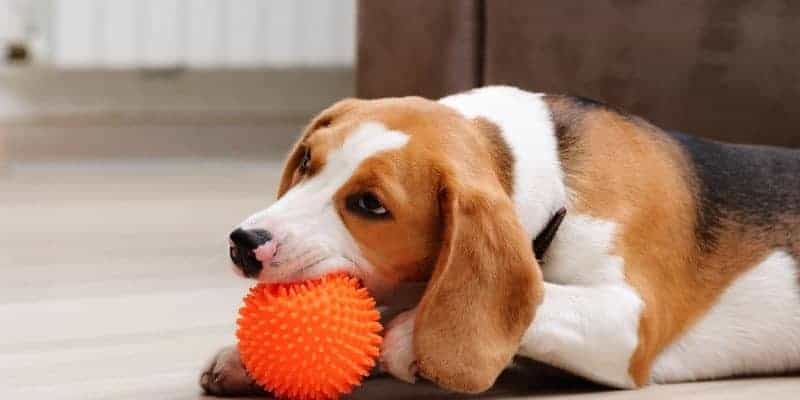 Now it’s time for the “bandaid” fix. Don’t do step two with the mindset that this is the long term fix, it isn’t. This is the step you’ll take to temporarily get your dog to stop barking when left alone while you work on step three with them.

You’ll want to get a toy for them, but not just any toy…something that you know they are going to LOVE more than anything you’ve ever given them.

Helpful hint: For most dogs, this involves some food that is going to take them a long time to get through. We almost always use a huge bone with some meat left on it. That should keep your dog occupied for a long time.

If you aren’t comfortable with your dog eating a bone while you are gone, you can also try a time treat dispenser ball. You place some treats inside a ball, and your dog has to roll the ball around to get the treats to come out.

Whatever type of toy you choose, the goal is to get your dogs mind off the fact that you’re gone and onto the toy.

The trick here is ONLY to give your dog that toy when you are gone. You want to create an association in their brain that when you leave, it’s a good thing because they get their toy. The second you come back home, take the toy/treat away.

Step 3: Desensitize Your Dog To Being Left Alone 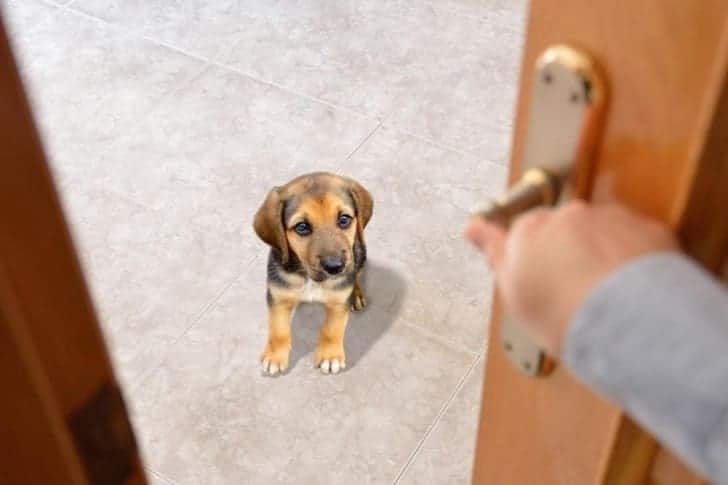 This is the part that will take some work, but if you’re willing to put in the work for a few weeks, it’s a great long term fix, and you can stop using the “only when alone” toy.

On a weekend where you don’t have to go to work, the first step in the process is finding your dog’s panic point. In other words, seeing how long it takes them to start barking after you leave.

Pretend like you’re going to work. Get dressed, grab your phone, wallet, and keys, say goodbye to your dog like you usually do. Then walk out the door, take a few steps, and wait to see how long it takes them to start barking. It’s ok if they start barking at 5 seconds, that means you have a 5-second panic point.

Spend The Next Hour Trying to Beat The Panic Point

About once every 10 minutes for the next hour, go outside and wait by the door. About a minute after they start barking, come back in, sit down, and read a book or watch TV. You don’t want to praise your dog during this period because they’ll begin to think that barking equals praise.

Each time you go outside, make sure you time how long it takes for your dog to start barking. The goal here is to gradually increase the amount of time you can be away before your dog starts barking.

If possible, do this every day, but we understand some of you will only be able to do it on the weekend.

Don’t expect a quick fix. This might be a simple exercise for you, but it’s highly stressful for your dog. Don’t do this for longer than an hour per day. If you stay consistent, your dog will eventually become desensitized to being left alone because they know you’ll come back. It may take a couple of weeks, or it may take a couple of months, but eventually, you’ll have a well behaved and silent dog when you leave them alone.

If step two (using an “only when alone treat) doesn’t work with your dog, you have a few other options you can try replacing it with. It’s ok to mix and match multiple of the options below.

Exercise is excellent for dogs that bark when they’re bored. If you can take your dog on a 20-minute walk before you leave for work, that might be enough to get rid of some of that built up energy and prevent them from barking.

We recently wrote an article on what type of music dogs like. The answer is by far classical music. This method works great for dogs that feel lonely. Classical music has the same pitch as howling, this subconsciously makes the dog believe there are other dogs in the area and they aren’t alone.

If you have a hunting dog, this is a must! Hunting dogs will go crazy when they see another animal outside. Once they see that animal, it’s hard for them to get their mind off it, so they continually bark until someone lets them out to go chase.

The best way to prevent this is to close the curtains. Make sure your dog can’t see outside. Remember – out of sight, out of mind.

Do you have an outdoor dog? One of the best ways to get them to stop barking is to bring them inside. There’s too many distractions and noises outside, you never know what can set off a bark.

Not only will your dog learn better social skills in doggy daycare, but they’ll also have a lot of fun! If you can afford to put your dog in daycare while you’re gone, this is a wonderful option.

What NOT To Do

Now that you know how to stop a dog from barking when left alone, let’s talk about the things you SHOULDN’T do. It’s common to make the following mistake, but try to avoid them as much as possible.

Don’t Yell At Them

Yelling at them can make the barking worse. They’ll assume you’re “joining in on the fun” and start barking louder. Plus, they will likely have no idea what you’re yelling at them for.

Don’t Pay Attention to Them When They Bark

The best way to teach them that barking isn’t ok is to turn your back when they begin to start barking. Keep your back turned or walk away until they stop. Once they stop, you can turn around and start petting them again. Just remember, the second your dog begins to bark again, turn your back.

We received an email from a reader asking if it’s ok if they just let their dog bark it out while they are gone. The first answer that came to our mind was “no, because it annoys the neighbors.” However, they went on to explain that they don’t have any neighbors. Does that make it ok?

The answer is still no. This is a stressful time for your dog. If you care about the health of your dog, you’ll want to avoid stressful situations. Stress is not good for dogs, just like it isn’t good for humans.

The only time you should use a muzzle on your dog is to prevent them from biting when out in public. Other than that, you shouldn’t muzzle your dog.

The Process Works – Be Patient

I know you want to fix the barking as soon as possible, but it does take time. Your dog isn’t doing this to annoy your neighbors. They’re either scared or stressed out that something is wrong. Just remember that step 2 is not a permanent fix. Although it’s an important step, the focus should be on step 3.

Stay consistent for a couple of weeks, and before you know it, you’ll no longer have to worry about this issue.