It may come as a shock to you when you find out your dog is aggressive towards other dogs. After all, you’ve spent so much time training him to be a “good boy,” and he’s perfectly friendly toward your human friends. But the second he sees another dog, all bets are off!

Does that sound familiar? Don’t worry, you’re not alone. The number one reason dog owners seek the help of dog trainers is because of aggression toward other dogs. The good news is that with time, this issue can be solved.

There is a three step process we use to get rid of a dog’s aggression toward other dogs.

Follow the advice below and you’ll soon be taking your dog on walks without worrying about aggression toward other dogs. 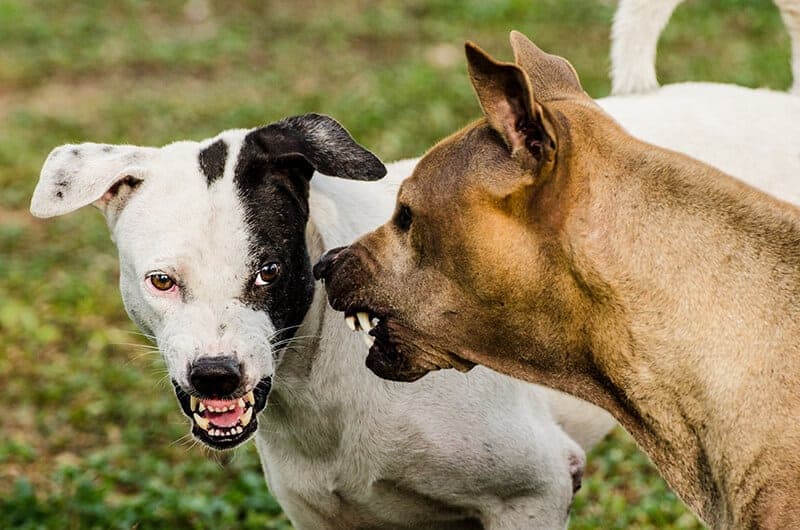 In most cases, when dogs are a little too aggressive with other dogs, it means they were never properly socialized as a puppy.

Puppies usually go to their new home at around 8-12 weeks. It’s great for them to bond with their owners at such a young age, but the downside is it means they won’t be socializing with other dogs.

Lack of socializing with other dogs at such a young age leads to a lack of social confidence. They’ll either feel fear, threatened, or anxious when around another dog as an adult because they didn’t spend time around other dogs as a puppy.

If you have a new puppy, it’s essential to make sure they socialize with other dogs, preferably other puppies. If you don’t have another dog, you can always talk to your friends that have dogs and see if they would be ok having some puppy playtime. You can also take your puppy to the dog park (keep them on a leash) and let them socialize with other friendly dogs.

If your dog was never adequately socialized as a puppy, obviously you can’t go back in time and change the past. However, there are still some things you can do to teach your dog proper social skills.

On top of the main reason (lack of social confidence), your dog might be aggressive with other dogs due to one of the following:

Although we believe all dog breeds can be trained to be friendly with each other, some breeds are more prone to aggression toward other dogs than others. Some were also bred to hunt, so when they see a smaller dog, their instincts take over and assume the smaller dog is prey. Again, this behavior can be corrected.

If you take a blast to the past and think about what you learned in your high school science classes, within the brain there is something called the amygdala. These are two almond shaped spots near the mid-brain that are responsible for a survival instinct called “fight or flight.” Both you and your dog have that instinct.

The difference is humans have better control over it because we can rationalize our thinking. We can better analyze whether something is a threat or not. Dogs can’t analyze in the same way we can.

If you notice your dog is only aggressive toward other dogs that come in or near your house, there’s a good chance they are protecting their territory. Out in the wild, there’s a battle for territory. Dogs that find a suitable region that provides plenty of shade, food, and water will fight off any other animal that tries to take it from them.

This is more common (although not exclusive) in male dogs. If your dog feels like they are “alpha dog,” and you bring another dog into the house, they may feel like their social status is being challenged. Because of this, they become aggressive toward the new dog in an attempt to let the new dog know who the boss is.

Your dog knows you’re the one that takes care of them. You provide shelter, food, water, and you’re in control of their toys, treats, walks, and so on. If they sense you may be in danger because of another dog, they’re going to protect you.

Most people assume this is only a problem in male dogs. Although male dogs can indeed get aggressive when fighting for a female dog in heat, female dogs are incredibly aggressive during parts of their heat cycle.

When a female dog is in heat but is not yet ready to receive, she will be aggressive toward any male dog that attempts.

Dog is in Pain

Dogs are good at hiding their pain. If they show pain out in the wild, it could be a death sentence for them. Predators will always go after the hurt and injured before they go after the healthy and strong.

This means that even if you don’t notice the pain, your dog might be in pain and doesn’t want other dogs to come near because they know they won’t be able to protect themselves in a fight. In this case, the aggression isn’t in an attempt to fight, it’s in an attempt to prevent a fight.

Dog aggression is typically due to one of the above reasons. Below we will go over the three step process to put an end to dog aggression. Before you read that, take some time to consider which of the above factors may be causing your dog to become aggressive. If it’s because of pain or is reproductive aggression, the training below will not work. However, the training will work well for any of the other causes.

Putting an End to The Behavior 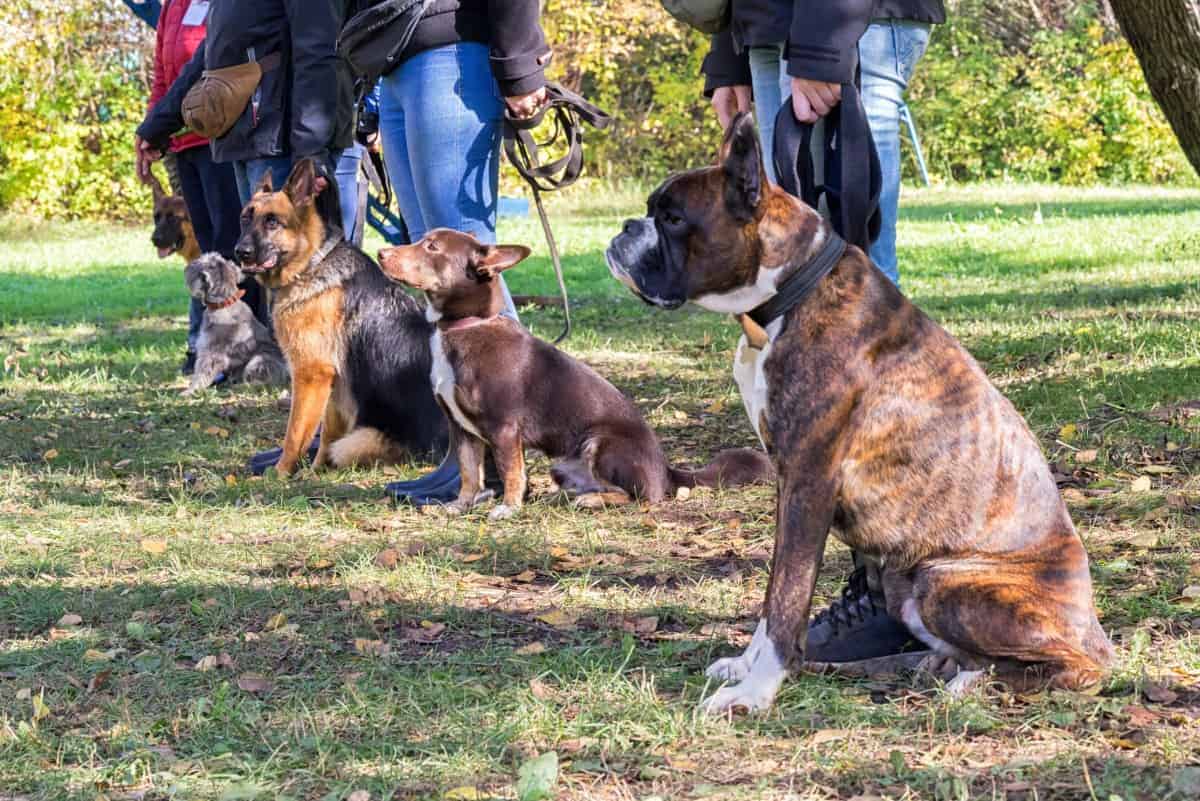 Now that you know the possible reasons your dog might be aggressive toward other dogs, it’s time to go over the three step process to put an end to dog aggression.

The point of desensitization is to get your dog used to being around other dogs. You’ll need two things to perform this.

Start by having your friend take the other dog to the same park you’re going to, but instead of going together and meeting up right away, make sure you’re on opposite ends of the park.

Make sure you’re far enough away so your dog is not reacting to the other dog. Give your dog a simple command such as “sit” to make sure you have their attention. If they sit on command, give them some praises and take a few steps forward. Give them the same command again and see if you still have their attention. Each time your dog obeys you take a few steps forward.

The second your dog notices the other dog and stops paying attention to you, that’s your sign to take a few steps back and start over. Don’t continue moving forward while they’re anxious about the other dog.

This can take a few days up to a few weeks for your pooch to get used to being around other dogs. If it’s been a few weeks and you have reached a sticking point, you’ll want to move onto step two below.

Not all dogs require this step, but if giving praises alone in the desensitization practice isn’t working, you can use treats as positive reinforcement.

The goal of this practice is to change the way your dog feels about other dogs. Before the training, they may have viewed the dog as a threat. Now that they know they get treats when another dog is around, they’ll see other dogs positively.

Step 3 – Take it To The Streets

After practicing the desensitization and possibly the positive reinforcement, it’s time to take what you practiced to the streets. This is where we will see if the training worked.

Take your dog on a walk in an area you know other dogs will be walking. Each time you see another dog, give your dog a treat IF they don’t become aggressive. It’s ok if they notice the other dog and get excited, but if they become aggressive, don’t give them a treat.

After a few walks, you won’t need to carry treats with you anymore. At this point, your dog should be completely desensitized to seeing other dogs, and the reaction should be positive instead of negative.