Mom dogs eat their puppies poop for two reasons, both of which are survival instincts. When puppies poop, the scent will make it easy for predators to find them. The mother will eat the poop to get rid of the scent. The second reason is to keep the den clean so they can lie down to sleep. 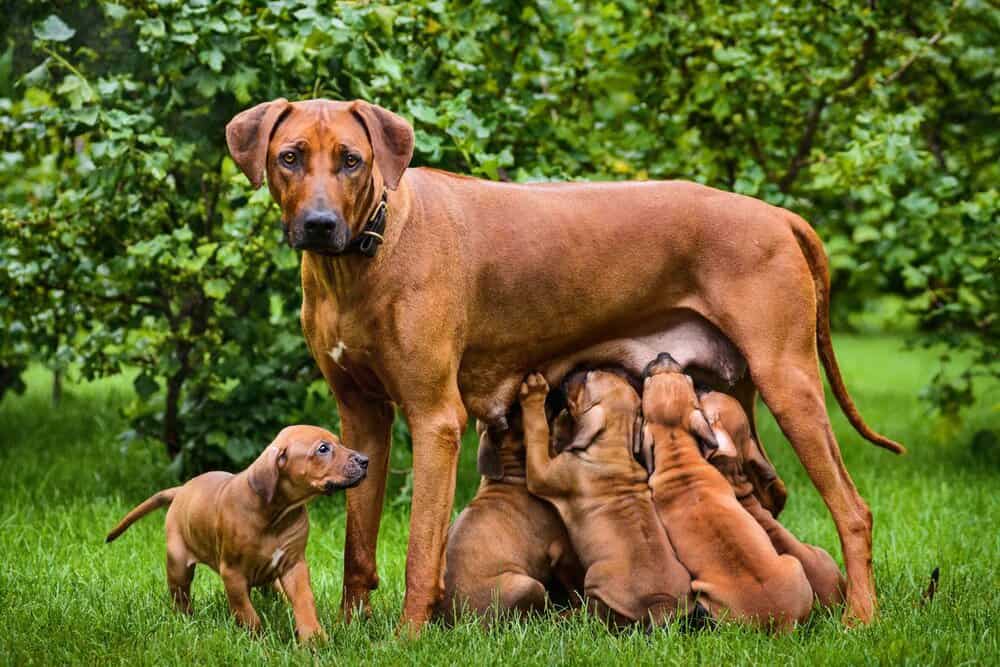 New breeders are often surprised by the many aspects of raising a litter of puppies. From the cost to the amount of work it takes, raising a litter isn’t as easy as most people think. There are several other surprises new breeders will run into along the way, one of which is the fact that a dam will usually eat her puppies’ poop from the time they are born until the puppies are weaned.

Some mothers will even continue to eat the puppies’ poop until well after they are weaned. But why do they do this? It seems like an odd behavior, but it goes back to the dog’s roots. Wild dogs would eat their puppies’ poop, the placenta, and everything from the birth of the puppies.

There are two reasons a mom dog will do this.

Another reason is to keep her den clean. Mother dogs do not like to lie down in a mess when feeding her puppies, so she will make sure the area is cleaned and ready for her to lie down when it’s time to feed her puppies.

How Long Will a Mom Dog Continue to Eat the Puppies’ Poop?

A mother dog will usually continue this behavior for about three weeks. Between three and four weeks, a breeder begins introducing puppy food in the form of mush to the litter. As the puppies begin to eat more and more puppy food and drink less and less milk from their mother, the mother dog will stop eating their poop.

How Should I Keep the Puppies’ Area Clean?

Around three to four weeks is also the time that caring for the litter becomes a much bigger job for the breeder. Young puppies are incredibly messy eaters, and they make an especially big mess during the week or two in which they are eating mush rather than dry food.

The puppies tend to get their paws and faces covered in the mush. They run through eachothers waste now that the mother is no longer cleaning up after them. This makes for a huge mess. The breeder will have to clean the puppies’ area at least four times per day to keep a sanitary environment.

Other odd behaviors in mother dogs include changes in temperament. While some dams maintain their typical temperament throughout whelping and nursing, others can become aggressive even when they are normally anything but aggressive.

How Will I Know When to Intervene?

As a Breeder, it’s unnerving to watch your dam exhibit some of these unfamiliar behaviors. However, most of the time, these changes in the dam are just a natural part of her whelping a litter.

A Breeder should not worry about the dam trying to consume the poop of her young puppies, nor should she be stopped from doing so. The puppy feces will not hurt her.

The female does not realize that her puppies are not in danger of predators, so trying to stop her from consuming the poop will only cause her anxiety.

Causing a mother dog undue anxiety while she has young puppies could cause preventable problems such as mastitis resulting from the mother dog not feeding her puppies often enough. On the other hand, stress in the dam could also cause low milk production, leaving the puppies without enough nourishment.

Therefore, the breeder should let nature take its course. A breeder should intervene, however, if any of the dam’s behaviors cause harm to her puppies or herself. In rare circumstances, the dam will become aggressive toward her own puppies.

There are various theories why this happens, but if it does, the puppies should be removed from the dam and given a milk replacer, or the dam should be subdued while the puppies nurse.

The only time a Breeder should intervene is if the dam is a perceived threat to herself or the puppies. If she is simply acting aggressively toward potential threats and cleaning up after her puppies, she is best left alone to do what nature intended.

If any behaviors the dam exhibits seem unusual, or if you are not sure whether something is normal or concerning, it’s important to have a vet on call and available to you. Many breeders work with reproductive veterinarians. These vets are specifically trained in all things related to the health of a whelping dam and her litter.

Because every dam is different and responds to whelping differently, you must call the vet if anything seems wrong. Behaviors such as aggression and eating the puppies’ poop are generally considered very normal in a whelping dam. Still, breeders should never feel ashamed of calling their vets if they aren’t sure about something.

What Precautions Should I Take?

When a dam instinctively eats her puppies’ poop, it is generally considered harmless. However, the mother dog can get worms from doing this. All puppies are born with worms because worm eggs can live inside the uterus of the mother and hatch in the intestines of the puppies shortly after birth.

Consuming their feces can give the mother dog a case of live worms, which must be treated. All puppies should be treated with pyrantel and ivermectin beginning at two weeks of age and continuing until they go to their new homes at eight to ten weeks old.

The new owners should then continue with monthly treatments throughout the duration of the dog’s life. The vet usually prescribes these medications in a pill that combines flea and tick prevention or in a chewable, which protects against heartworm. A breeder should plan to treat a dam with the appropriate dose of ivermectin and pyrantel at the same time that the puppies are treated.

This course of treatment should be the standard procedure for whelping puppies, but it is an especially important procedure when the dam consumes the puppies’ feces.

This means having a safe and comfortable place for the dam, which is away from perceived threats, having worm treatments ready and available for puppies and the dam, and having access to a knowledgeable veterinarian. 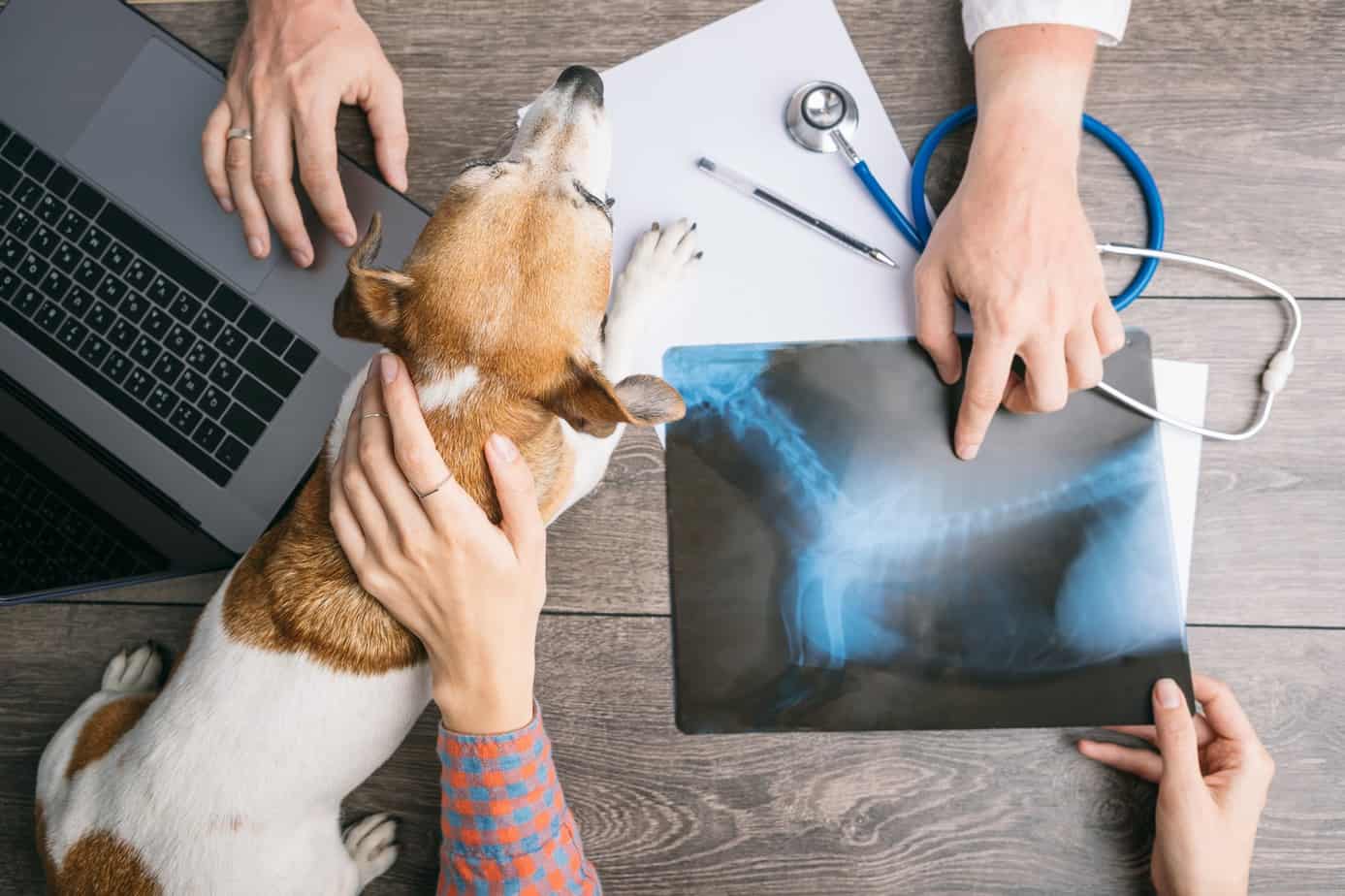 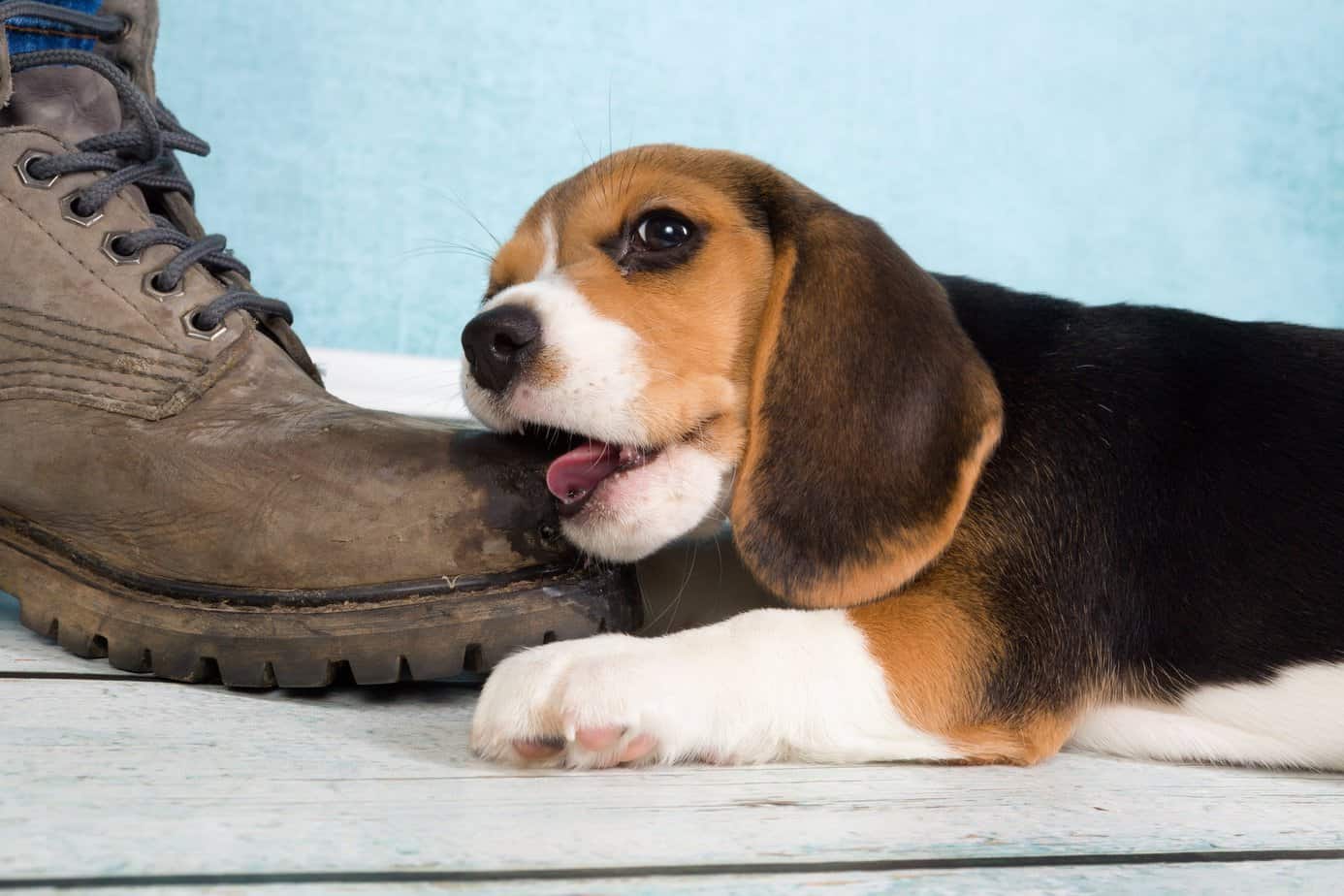 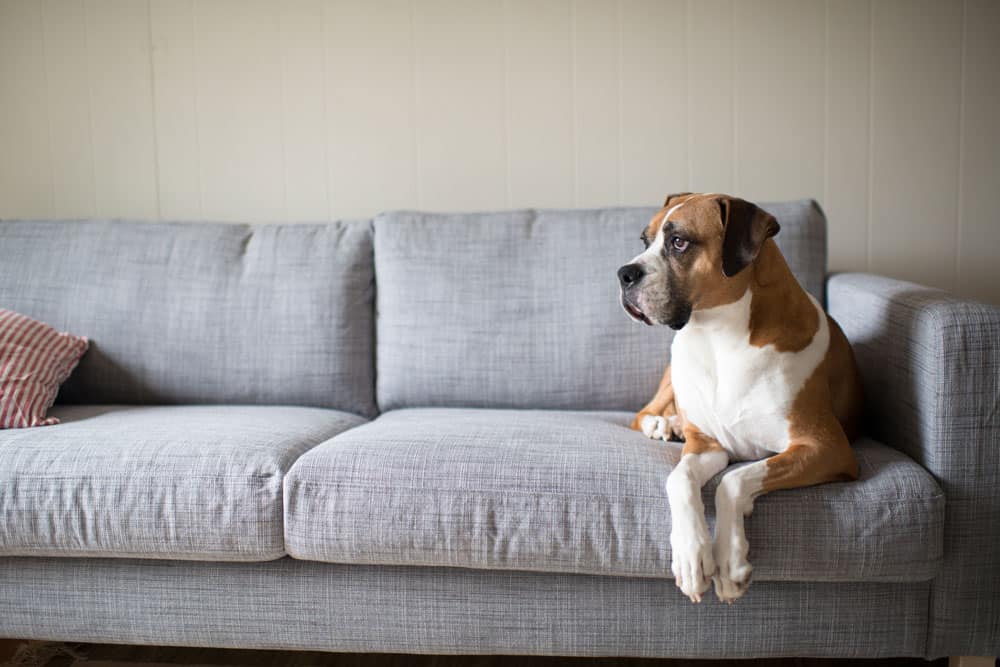 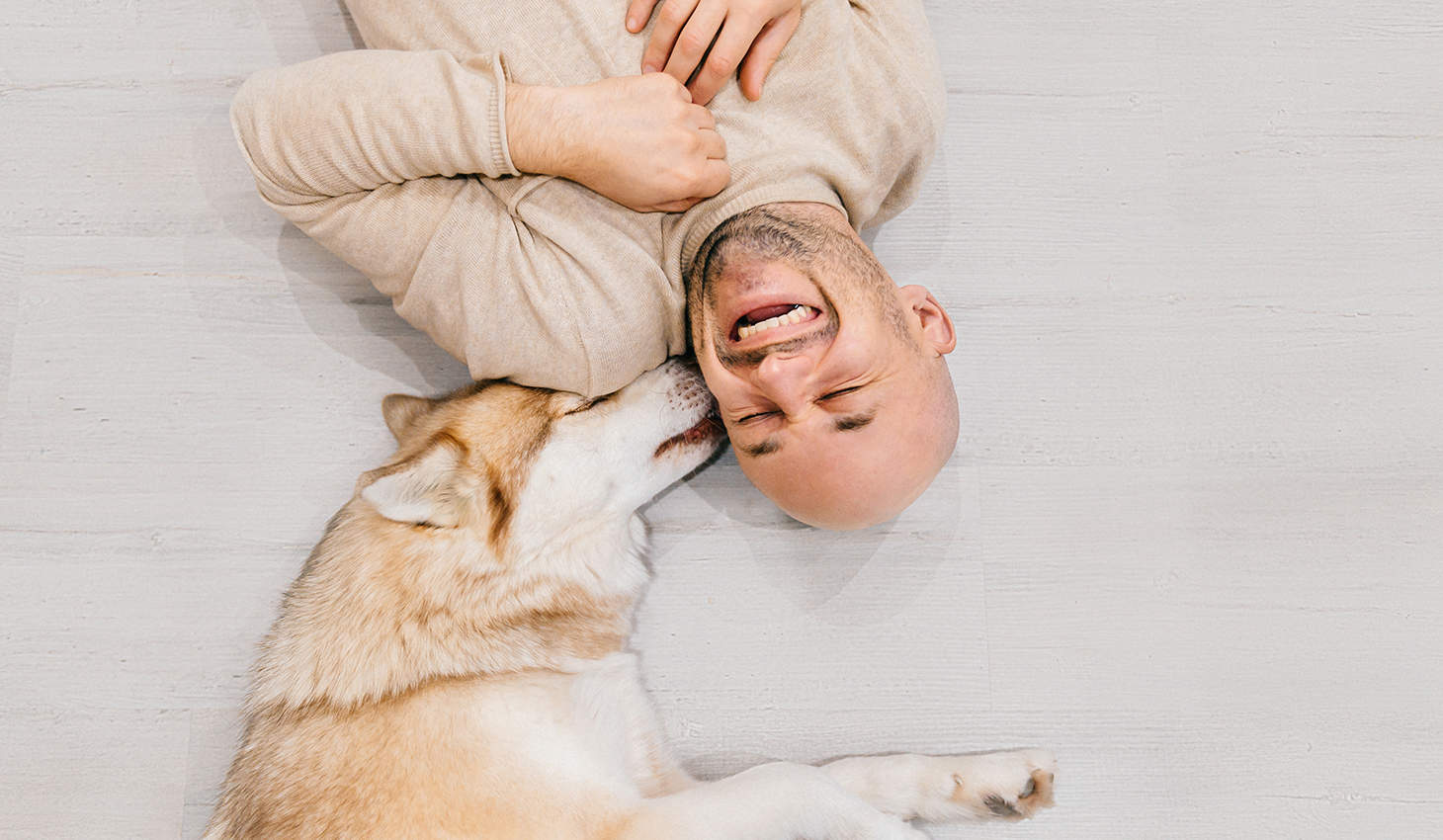