Have you ever wondered why dogs wink at you? Here’s the simple answer…because it’s the cutest thing in the world! 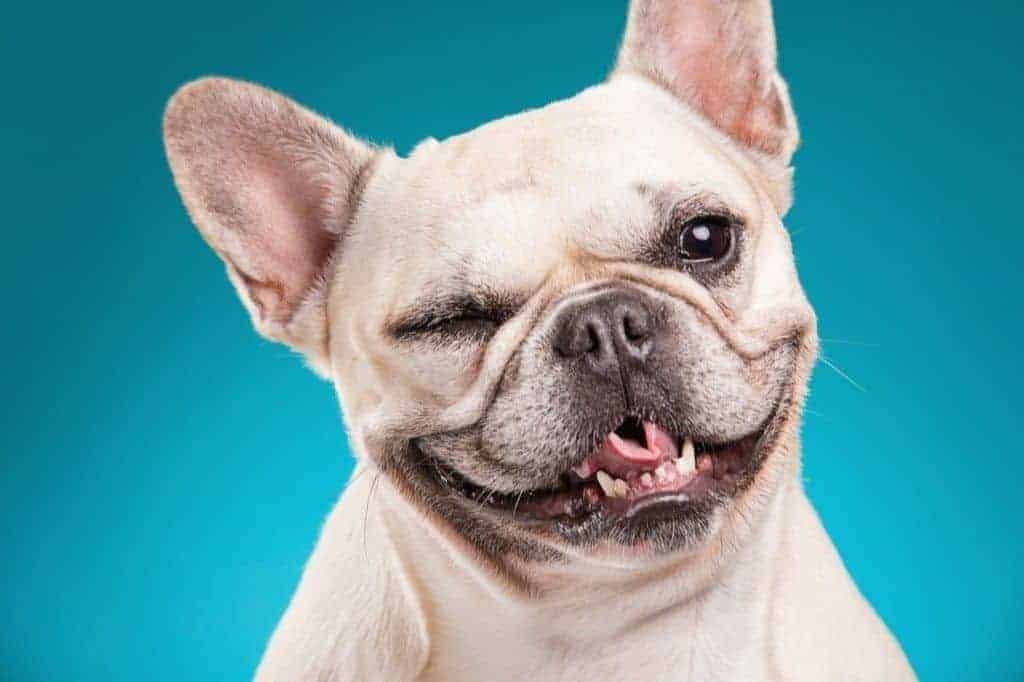 Ok, so maybe that isn’t the true answer, but how cute is it when your dog winks at you! My heart can’t be the only one that melts when my puppers gives me a wink.

Other than keeping peace and recognizing you as the leader, there are a few different reasons dogs might wink at you. Below we will go into more detail on the primary reason and then briefly discuss a few of the other possibilities for the wink.

Dogs Wink at You to Keep Peace

We view eye contact as polite. We were taught that when talking to someone, the polite thing to do is maintain eye contact. That’s not the case with dogs. When two dogs stare at each other, the dominant one is the one that keeps eye contact longer. Even a simple wink is enough to express submission to the alpha.

We need to remember that dogs are all about social order. When they know they aren’t the leader of the house, they want to make it clear to you that they’re submitting to you as the leader, and winking is one of the many ways a dog will express their submission.

So next time you’re looking your dog in the eyes and they wink, that’s their way of breaking eye contact and letting you know they’re looking to you to lead the pack.

Some Dogs Wink Because They’re Imitating You

Imitation is the sincerest form of flattery, right? We recently wrote an article on how to make your dog smile. In that article, we talked about how dogs will often imitate human behavior and smile because they see us do it so often.

The same is true with winking. Even though your dog has no idea what a smile or a wink means, their desire to communicate with us through body language is still there. This means they will often imitate our body language. If you wink a lot around your dog, it’s not uncommon for your dog to pick up this behavior.

As cute as it is when dogs wink at us, it might not be as cute when we find out they are doing it because of an issue with their eyes. Many eye issues can cause a dog to blink just one eye. Some are serious medical conditions, some are nothing to be worried about. Here are a few of the most common issues that will cause your dog to wink at you.

Entropion is common in dogs and can be very uncomfortable and painful. Thankfully, with the correct treatment, entropion can be resolved.

Entropion is when the dog’s eyelid folds inward, causing the eyelid to rub against the eyes. It might start off a slight itch for your dog but can eventually turn into a painful ulcer. Dogs that have this condition will often wink as their way of scratching their eye.

Although this condition can happen to any dog, it’s much more common in brachycephalic (short-nosed) breeds.

It’s much easier to say dry eyes than it is to say Keratoconjunctivitis Sicca, isn’t it? Although if you want to sound smart around your family and friends, feel free to bust out that word during the next holiday party!

KCS is when the tear glands don’t produce the amount of tears they should, resulting in dry eyes for your dog. This condition can affect both eyes, but it can also affect only one eye. The natural instinct when an eye becomes dry is to blink. If your dog is continuously blinking the same eye, they might have KCS.

Pink eye in dogs isn’t quite the same as pink eye in humans, but it has very similar symptoms. Several diseases can cause pink eye, the most common being a bacterial or viral infection.

The good news is pink eye is easy to spot and easy to treat, although you’ll likely need to make a trip to the vet to get the required prescription.

Pink eye can cause itchy and dry eyes, which will cause your pup to wink the infected eye.

Glaucoma is when excess fluid causes pressure in your dog’s eyes. One of the main ways to tell if your dog has glaucoma is if their eyes are watery. The excess tear production will cause your dog to blink, attempting to remove the excess liquid.

If you suspect your dog might have glaucoma, be sure to call your vet ASAP. If treatment is delayed, blindness can be the result.

Other Irritants in the Eye

Your dog could also be blinking just because they have irritants in their eyes, such as dirt or dust. Dogs sniff so low to the ground, so it’s not uncommon for them to get something trapped in their eye.

Many other health conditions could cause a dog to excessively wink. If you notice your dog doing a lot more winking than usual, it would be smart to consult with a vet and rule out any possible health concerns

Can You Teach Your Dog to Wink on Command?

Assuming you have ruled out health concerns, that means your dog is probably winking at you because they’re recognizing you as the leader of the house or because they’re just trying to imitate what they see you doing.

Since a dog winking at you is super cute, you might be wondering if it’s possible to teach your dog to wink on command.

The good news is it is possible, but it will take a lot of patience. It’s easy to teach a dog to sit or lay down because those are both natural instincts for dogs. Winking does not come naturally, so you’ll be teaching your dog a command that goes against their natural instincts.

In the following section, we will teach you how to make your dog wink on command. Just remember to be patient with them. It’s going to take them longer to learn this trick than most other tricks.

Figure Out How to Make Your Dog Wink

Before you can teach your dog to wink, the first thing you must do is figure out how to make them wink. The method we have seen the most success with is gently touching the whiskers on the side of the eye you’d like them to wink with.

For example, if I want my dog to wink his right eye when I give the command “wink”, I’ll start off by touching his whiskers on the right side of his face.

If touching the whiskers doesn’t cause your dog to wink, you can also try tapping them on the top of the head on the side of the eye you want them to blink with.

The only problem with that method is it causes some dogs to close both eyes, we want them to only close the one eye.

Give The Command Each Time

Give Your Dog a Treat

If your dog winks when you touch their whiskers and give the command, give them a treat right after. Continue doing this a few times every day for the next 1-2 weeks.

After a week or two, your dog should associate the word “wink” with blinking an eye. Now it’s time to put your dog to the test. Give them the command “wink” without physically touching them. If they wink, great! Give them a treat. If not, that’s ok. That just means you’ll have to repeat step 3 for another week or two.

Winking is a very advanced trick and might take dogs a couple months to get down. Consistency is key. As long as you stay consistent, your dog will eventually learn how to wink on command.

Now That You Know Why Dogs Wink At You…

The first thing you should do is make sure there is nothing medically wrong with your dog. Unless this behavior is excessive, you probably have nothing to worry about. When your dog winks at you, they’re most likely breaking eye contact to show you respect as the leader of the pack.