If you’re a dog owner, you know how much joy, entertainment, and laughter dogs provide throughout the day…and it’s not limited to when they’re awake! My dog has managed to entertain me even when he’s sleeping, thanks to some bizarre sleep positions.

Dogs sleep 12-14 hours per day, so it’s natural to see your dog sleeping in multiple positions throughout the day. One of the funniest positions is sleeping on their back. It’s even funnier when their legs are straight up in the air and the tongue is hanging out. If you’ve seen your dog in this position, you might begin to wonder why they’re sleeping like this.

Sleeping Positions Can Change Based On Several Factors 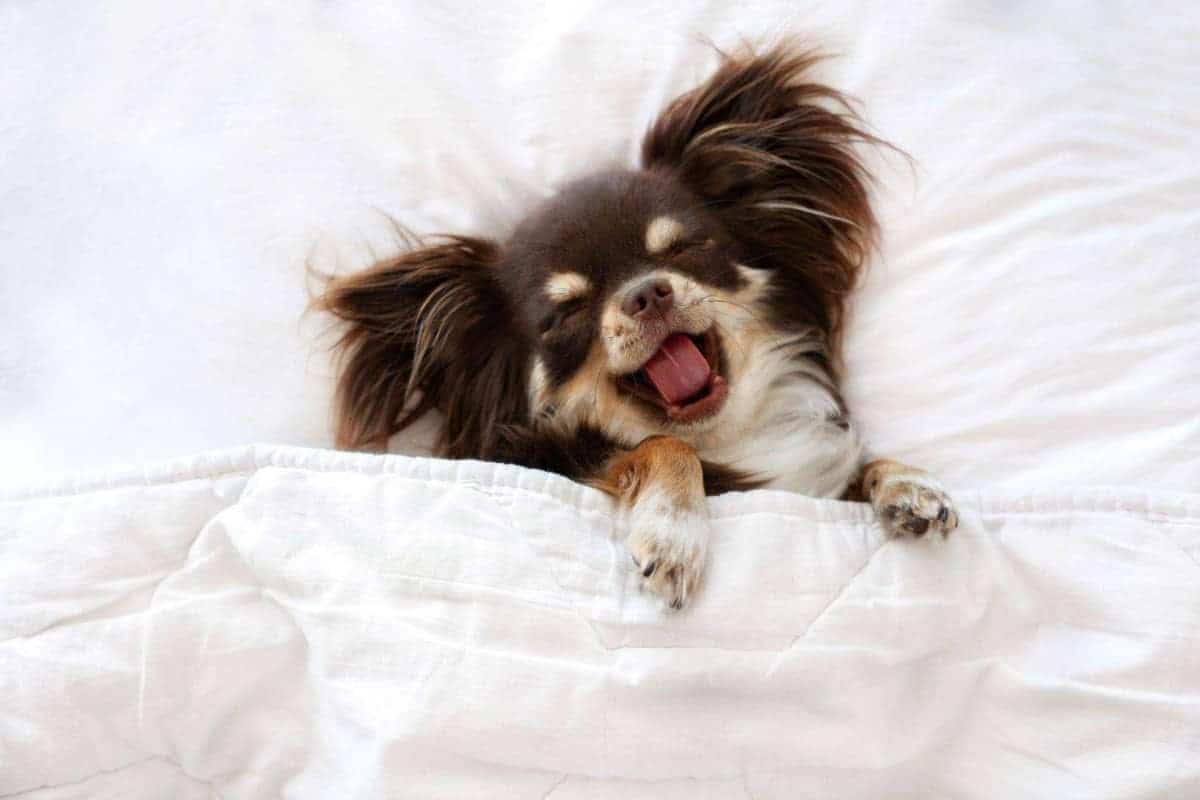 Since dogs sleep 12-14 hours per day, it’s normal that they’ll sleep in a variety of positions. Just because your dog sleeps on their back a few times then curls up in a ball the other times doesn’t mean they no longer feel safe.

This is a big one. When a dog is cold, they’re not going to sleep on their back. This is the “coldest” position for them. Cold dogs will either snuggle up with another dog or a human, or they’ll sleep curled up in a ball to keep themselves warm. This is how most outdoor dogs sleep.

Who They’re Sleeping Next To

You might notice your dog only sleeps on their side or on their back when they are next to you. That’s because you make them feel safe and they know when you’re around, you won’t let them become someone lunch.

Sleeping on the side and on the back are the two most vulnerable positions for your furry friend to sleep in. Most dogs will only do it if someone they trust is nearby.

Yup, dogs get emotional just like humans do. The difference is your dogs current emotional state will determine their sleep position. If they are scared, they’ll likely find a corner to sleep in and curl up, or they’ll sleep in superman position on their belly with all four legs sprawled out, ready to run whenever needed.

Dogs that are feeling relaxed and don’t have a care in the world are ones that sleep on their back or on their side. This will change as the day goes on. Just because your dog is sleeping in a position that indicates they may be scared doesn’t mean you did anything wrong. Dogs get spooked easily, especially small dogs such as chihuahuas.

If your dog consistently sleeps in a particular position and then randomly stops and doesn’t come back to it, that’s a sign of injury. Let’s say they usually sleep on their side, but now they will only sleep on their belly. This could indicate a spine or hip injury. Feel around the area they refuse to sleep on. Does it seem like they are in pain when you press there? When in doubt, take your dog to the vet for an exam. Better safe than sorry!

A Deeper Dive Into Back Sleeping

If you notice your dog’s primary sleeping position is on their back, that’s usually a good thing! At the very least, it means you’ve provided your dog with an environment they feel safe in. Let’s take a deeper dive into what back sleeping means.

We received a few emails over the past few months asking f a dog sleeping on their back is a sign of submission to the owner. Not at all! When dogs are awake, they will submit to those that are more “alpha” than they are, but this is not the case with dogs who are asleep. Back sleeping has nothing to do with submission.

Helps Cool Them Off

Back sleeping is common in active dogs because active dogs tend to overheat. The best sleeping position to cool down a dog is on their back. There are two reasons for this.

First, the fur on the belly is much thinner, allowing more air to hit the skin. Second, contrary to popular belief, dogs actually do have sweat glands, which are located on their feet. By sleeping with their sweat glands exposed, they’ll feel much more relaxed.

Both positions expose vital organs, which is why you’ll never see dogs in the wild sleeping in either of these positions. But back sleeping takes it one step further. When sleeping on the back, they are in no position to quickly get up and run at the sign of danger.

So next time you see your dog sleeping on their back, just remember how much they trust you not to let harm come their way.

Imagine laying out on a hammock by the beach with a drink in your hand. You are completely relaxed and don’t have a care in the world. That’s just about how your dog feels when you see them relaxing on their back. All their muscles are totally relaxed, their paws are floppy (most of the time), and some dogs might even start snoring.

How To Make Your Dog Feel Safe When Sleeping 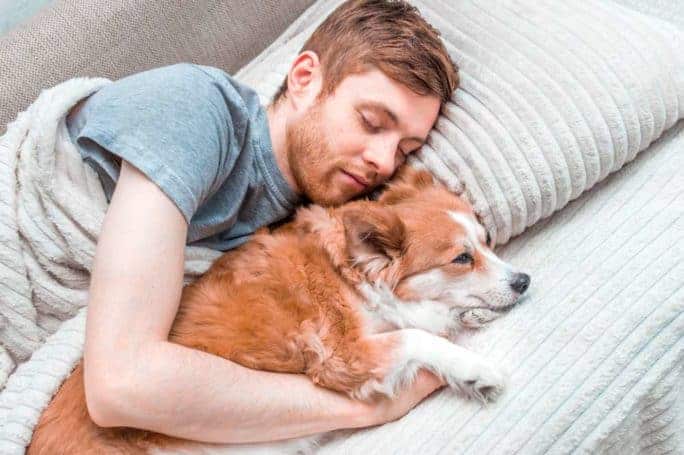 As you can tell, it’s a good thing when dogs sleep on their backs…but not all dogs do it even if they feel entirely safe in the environment that you’ve provided. Most dogs that feel safe will either occasionally sleep on their side or on their back. But what if your dog is doing neither?

It could be a sign they don’t feel completely safe in their environment. It could also just mean they don’t find either of these positions comfortable, or they have some spine/hip pain that is preventing them from getting in this position.

If you suspect pain may be the cause, it’s important to take your dog to the vet ASAP. If you believe it’s because they don’t feel as safe as they should, here are some things you can do to help.

Let Your Dog Sleep Inside

As mentioned earlier, you will never see a dog out in the wild sleep on their back or side. In fact, It’s unlikely that a dog sleeping in the backyard will sleep in that position. You may see them sleeping on their side, but it’s rare to see an outdoor dog sleep on their back. If you want to ensure your dog feels safe and relaxed when sleeping, let them sleep inside.

Let Your Dog Sleep Next To You

Dogs are pack animals, so it makes sense that they feel more comfortable sleeping next to someone. The time you’ll see your dog sleeping on their back the most is when you or someone they trust is next to them.

Even if your dog has complete trust in you and the living environment that you’ve provided, they won’t relax when sleeping if they’re in pain. If it seems like your dog is continuously tense even when sleeping, Feel around their hips and spine and see if they have any sort of pain reaction when you press down. If you aren’t sure, take your dog to the vet and get their opinion.

Make Sure They Get Plenty of Exercises

Most dogs are little fluff balls of energy! If you don’t give them a chance to let go of that energy during the day, they’re going to be tense at night and probably won’t sleep well. Dogs sleep on their backs the most after a long walk or 15-20 minutes of running around. So take your dog out on a long walk or play some fetch during the day, they’ll sleep much better!

We recently wrote a post talking about a study that was done on dogs listening to music. The results revealed that dogs do actually respond positively to music…classical music to be exact. Classical music had a very calming effect on dogs. So if your pooch won’t relax at night, try playing an hour of classical music and see if that helps them relax.