Whether you are the proud owner of a momma that has just had a litter, or you are bringing home a brand new puppy, you must be prepared to deworm your little pooch. The question isn’t “Should you deworm puppies”, it’s WHEN to deworm puppies.

The reason deworming a puppy is so important is because most pups are actually born with worms, and even those that aren’t born with worms, there’s a good chance they will become infected through their mothers milk.

But this leads to a good question…how do puppies become infected before they are even born? Most mothers have immature worm larvae in their digestive tracts. When she becomes pregnant, her progesterone levels go up which causes the larvae to awaken. These little critters have the ability to travel through the uterine wall and infect the puppies.

Responsible breeders will likely give pups their first doses of dewormer medication before they are ever weaned from momma and ready to go to their new home. However, whether they have or not, you are now responsible for keeping the pup dewormed and safe.

So when should puppies be dewormed?

Puppies should receive their first dose of deworming medication at 2 weeks, second dose at 4 weeks, third dose at 6 weeks, forth dose at 8 weeks, and an possible fifth dose at 12 weeks (depending on whether or not they are still infected). Although it is recommended to continue giving them deworming medication every 3-6 months for life, it’s not required. 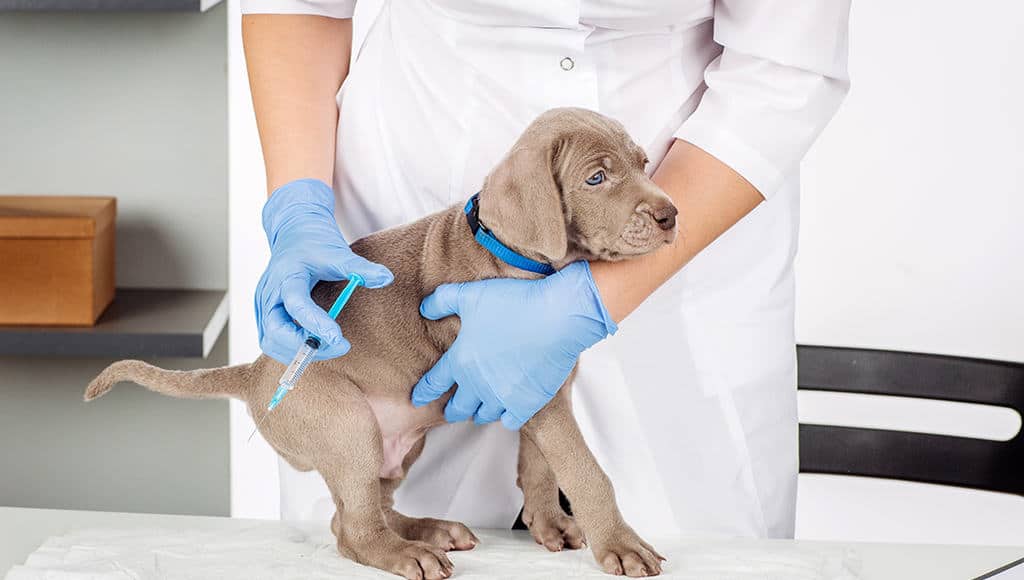 The first dose of dewormer should be given at 2-3 weeks of age. At this stage, momma is still taking care of all the pups grooming needs, especially cleaning feces they have passed. If possible, care should be taken to decrease the number of feces that the momma ingests. Additionally, momma should be treated at the same time as her pups.

By 4-5 weeks of age, pups are due for their second dose. Dosage varies by weight so this dose may be as much as double or triple the first depending on the breed of the pup. Large breeds will need a larger dose as they age, while many smaller breeds the dose only changes a little each time.

At 6 to 7 weeks of age, a pup should receive their 3rd dose. This may be the last dose before the pup is completely weaned from momma.

At 8 weeks, puppies receive their 4th dose of dewormer, and the pup is also ready to receive its first vaccine for distemper and parvo. This is usually a combination vaccine.

Puppies are typically sold to their new family around 8-12 weeks of age. This means getting the final recommended (but optional) dose of dewormer is up to the new owners. If you get a new puppy from someone else, then it is best to get the information from them on the dewormer doses that the puppy has received, as well as the type. It is best for the pup if the same type of dewormer is continued as they grow. From then on, if you choose to continue with dewormer medication, they will need to be given a dose every 3 months for the rest of their lives to ensure the best protection against worms.

Natural Deworming After The 4th Dose 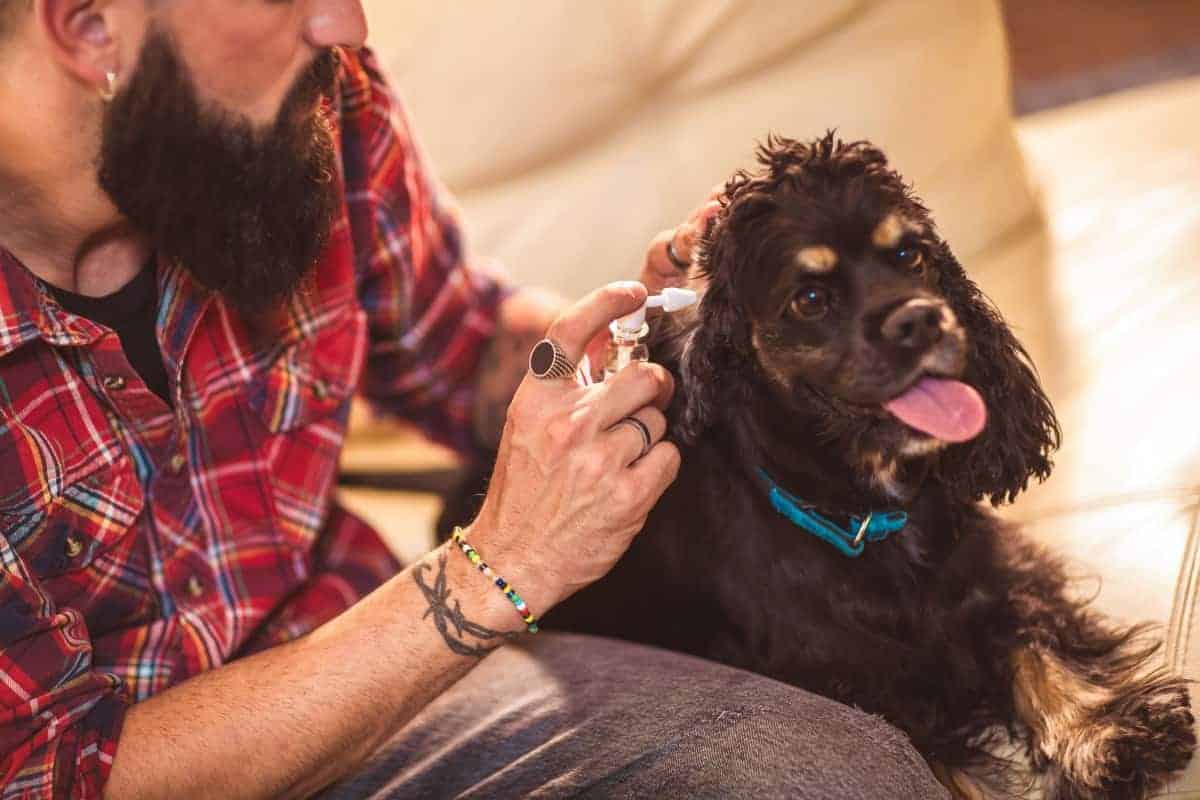 Recently there has been a lot of negative press when it comes to vaccines. Turns out, this negative press isn’t just for humans. Many dog owners are choosing to hold off on getting their dogs vaccinated as a puppy because they feel like the chemicals are too harsh for the puppy and cause too many negative side effects.

Our personal opinion here at K9Nerds is that there is nothing wrong with using chemically based dewormers that your vet recommends. We recommend going with vet prescribed medication for the first four doses to get rid of the initial infection. After that 4th dose, if you would rather take a more gentle and natural approach to deworming your dog, you do have some options.

Garlic is The Answer

This is the most recommended natural method because it’s been proven to work wonders for preventing worms. As a side benefit, it also helps prevent fleas which means your dog is much less likely to get a tapeworm (since tapeworms come from fleas). Your dog probably won’t eat garlic by itself, so chop up a clove and sprinkle it on their food. Do this every day for a week and repeat it once every three-six months.

Important: If the worm infection is severe it can cause long term damage to your dog. Because of this, you need to handle to situation using the fastest solution possible. This means using a vet prescribed medication. You should only use natural methods if the infection isn’t severe.

Can Worms Kill a Puppy?

The sad truth is that worms can actually kill a puppy. This is why we strongly recommend using a vet prescribed dewormer instead of going natural from the start. The most common type of worm a puppy becomes infected with is the roundworm. Roundworms can kill a puppy in a number of ways, all of which are related to the speed at which they reproduce.

Roundworms feed off what your puppy eats. Nutrients are crucial for the development of a puppy. If they aren’t getting enough nutrients, their organs won’t properly develop which will lead to death.

These nasty little worms are known to live in the digestive tract, but they can actually make their way to other organs such as the heart and lungs. This will lead to respiratory failure.

Roundworms reproduce quickly, but they can also die quickly. If they die in large numbers, it can block the intestinal tract which will lead to an eventual rupture unless surgically treated.

This is why it’s vital to deworm your puppy during the first 8 weeks. If not, they’re at serious risk of running into these issues.

Puppy Won’t Eat After Getting Dewormed

One of the most popular questions we get when it comes to deworming puppies is a loss of appetite after treatment. If your puppy stops eating after receiving medication, take them to the vet ASAP. The medication by itself won’t cause a loss of appetite, but what could be going on is a bowel obstruction.

When your puppy receives their first dose of medication, it will kill all existing live worms. If the infection was severe, the dead worms will pass through the intestines at the same time. If this happens in large amounts it could cause an obstruction. The only way to fix this is surgery. So if your puppy stops eating after getting dewormed, get them to the vet immediately.

Is it Ever Too Late to Deworm a Puppy?

The good news is that it’s never too late to deworm a dog! It’s always better to be safe than sorry. As we stated earlier, a responsible dog owner will deworm their dog regularly (once every 3-6 months). Since dogs constantly lick and roll in nasty areas, they’ll likely get infected with worms multiple times in their life. Unfortunately there’s no “one time medication” that will prevent worms forever. This means deworming them every 3-6 months is your best option.

What Should I Feed My Puppy After Being Dewormed? 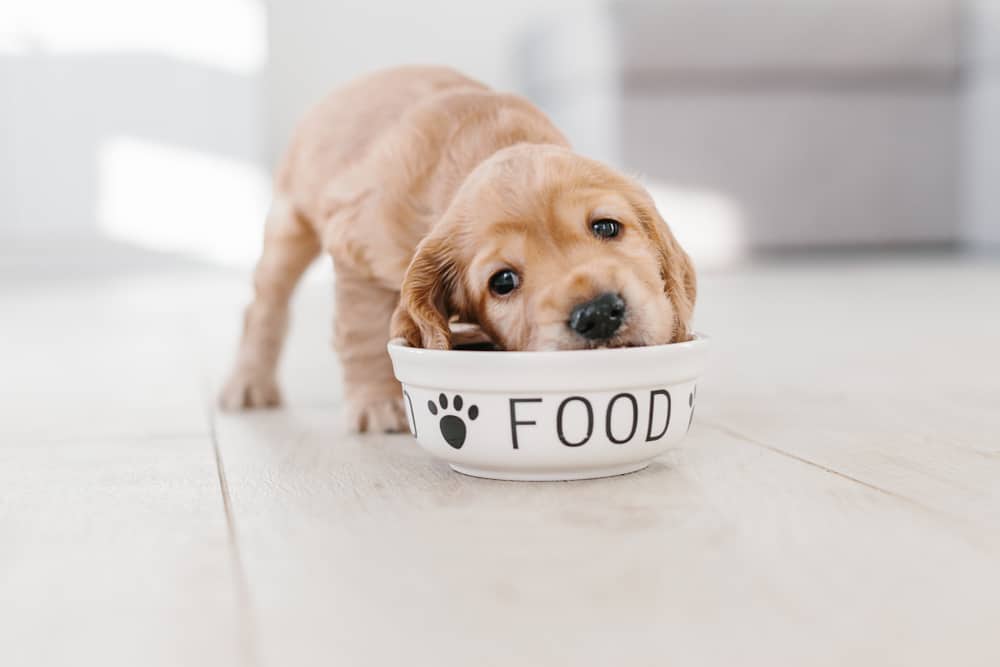 Since a lot puppies become infected with worms from their mothers milk, it’s normal to wonder if you should continue letting your puppy breastfeed after receiving their first dose of deworming medication. The answer is yes! That’s why the puppy should be dewormed every two weeks while breastfeeding. Milk from the mother contains a number of vitamins and minerals that are essential for the growth and development of a newborn puppy.

What Are The Side Effects of Deworming?

Most puppies won’t see any serious side effects caused by the deworming medication. However, some puppies might experience a few mild side effects that don’t last longer than 24 hours. This includes:

If your puppy becomes lethargic, drools more than usual, or starts trembling, they may have been overdosed. This isn’t as scary as it sounds and the symptoms should go away within 24 hours. If the symptoms last longer than 24 hours, take your pup to the vet.

Take Your Puppy To The Vet Immediately If They Experience One of The Following:

I Still See Live Worms in My Dogs Stool After Deworming

This is totally normal. In fact, it’s to be expected. The goal of deworming medication is to expel the worms, not necessarily kill them (although it does kill many worms). The medication helps expel the worms by paralyzing them for a short period of time. When they are paralyzed it makes it much easier for the dog to pass them. Once the medication wares off, the worms will no longer be paralyzed which is why you’ll see them moving around. This is why you’ll want to quickly clean up your dogs waste after they go to the bathroom.

Send Us Your Questions!

We understand the deworming process for puppies can be a bit confusing. We originally published this article covering when to deworm puppies, but shortly after being published, we received many emails asking more questions on the topic of deworming pups. If you have any questions we didn’t address in this article, please feel free to send us an email with your question. We will continue updating this post as we receive new emails.