Behavioral training with puppies can be tricky. They like doing what they want to. They think everything is a chew toy, your hand included. 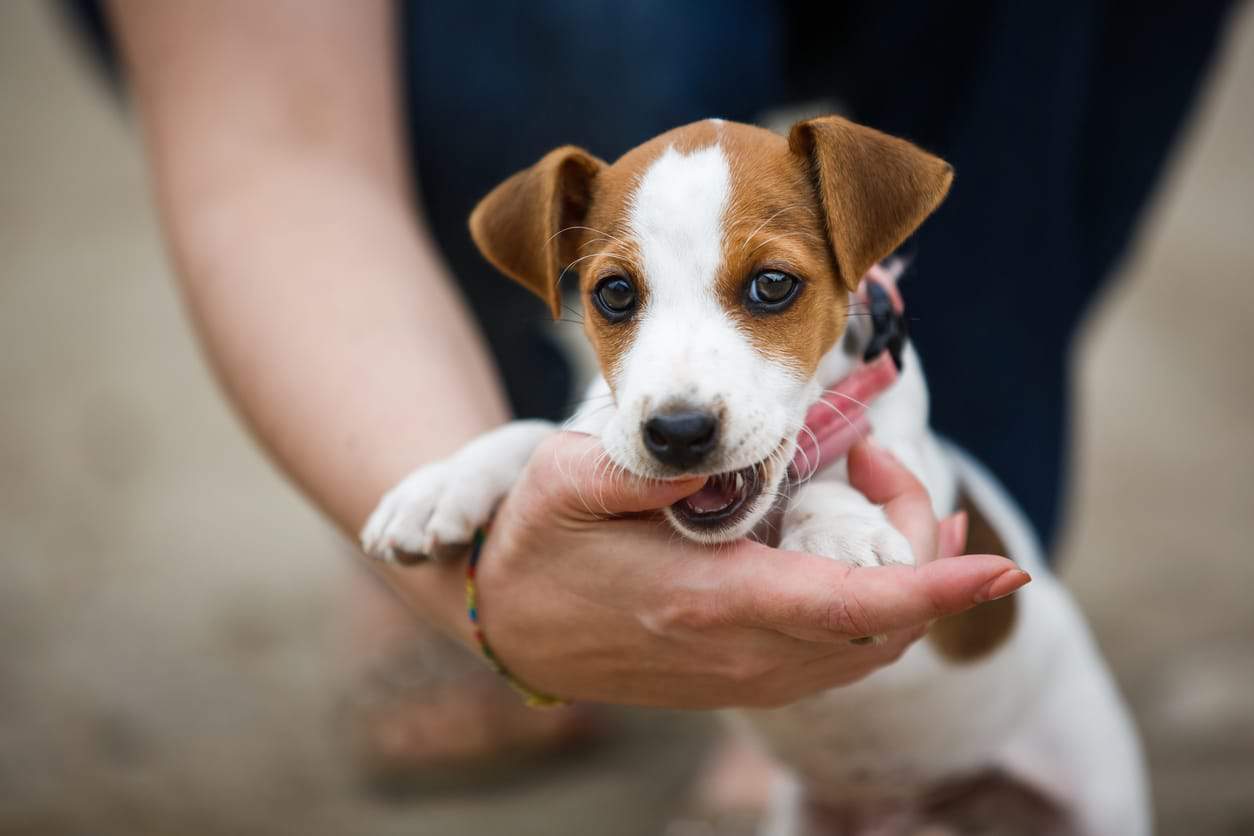 There are some people that “don’t mind” the chewing, but it’s a bigger deal than most people realize.

I get why people say they don’t mind being a chew toy. Some just love dogs so much that dealing with a few tiny teeth doesn’t bother them. Others don’t want to seem rude or offensive by removing the furry piranha from their hand. When my Akita was a puppy, one of my friends thought I would get mad if they nudged him away when he was biting them.

They don’t see the big issue. Humans aren’t chew toys or food. If we allow this behavior to continue, it can teach them that chewing on a person is acceptable. You never want that. When your pup becomes an adult that chewing will become biting.

If your puppy is ever chewing on someone’s hand, politely explain to that person that you are in training and don’t want him to chew on peoples hands, then hand the person a chew toy for the puppy to gnaw on. This should be enough to resolve the issue. If it isn’t, remove your puppy from the situation. Bad habits are hard to break.

If children are the chew toy, you want to try your best to get them not to run, scream, or push the puppy away. This will be seen as playful by your pup and encourage more of the nipping behavior. Be sure children are always supervised when around a puppy.

Teaching a puppy not to bite can be a smooth process when you know what to do. Start teaching them around 8 weeks old. If they are teething, keeping them from biting can be harder as they will be experiencing discomfort and biting helps relieve that discomfort.

Keep a lot of chew toys around. When I say a lot, I mean a lot. If chew toys don’t seem to be helping much, try frozen carrots…but if you give them frozen carrots, keep an eye on them and make sure they don’t choke. Ice cubes are a great alternative if you don’t have carrots. If your puppy won’t chew toys or carrots, he might go for ice. The best thing is ice melts quickly, so choking isn’t likely.

Yelp At Your Pup

When puppies play together, there is a lot of chewing, biting, pouncing, and running. If you watch a group of puppies, you are going to hear that high-pitched yelping sound. Much more than once most likely. This sound is acting as a cue to the offending puppy. It’s saying, “OUCH.” The other important thing to notice is the reaction of the biter.

They will stop whatever they are doing and freeze for a moment. Not out of fear but out of shock. Honestly, if someone yelped at me, I’d freeze up too. Could you imagine if people yelped at each other? What a hilarious world it would be.

Am I telling you to yelp at your puppy? Yes, yes, I am. This should get the same reaction as it would if you were another puppy being bitten. Drive this lesson home by letting your hand go completely limp. Then move your hand away. After 30 seconds or so, go back to playing. Repeat this as necessary. This will encourage gentle play in general, not just your hand. When your puppy starts to chew again, you want it to be noticeably lighter until you can barely feel it at all.

When he starts to back off when you yelp, give him a treat. This is good, and you want him to know it.

It’s not really tricking them, but it is. Pouncing, jumping, and biting can get annoying and painful. If they start pouncing on your feet or legs and trying to nibble you want to hold a treat down by your leg. You want him to smell it but not give it to him right away. Walk a few steps and if he doesn’t jump for a little while give him a treat while using command words such as “down” or “no jumps.” Teach children to do this as well. You really don’t want a child getting hurt by your puppy now or when he gets older.

Sometimes, pups have brat moments for no reason, just like children. They will show defensive signs. Snarled lips, rigid stance, and may growl. It is important no to yelp at this time. Yelping at this behavior may cause more aggressive behavior. Be calm and don’t do anything. If you have been holding them and they start biting, firmly but gently try to stop them. When they have calmed down, gently set them on the ground or floor.

With all this in mind, here are the things you should and shouldn’t do when trying to get your pup to stop biting.

With a little patience and time, your pup will learn that you aren’t a chew toy and will stop biting your hand.