When you bring home a new puppy for the first time, you’ll quickly realize you have a lot of questions! What size collar should I get? What type of bed does my dog need? What type of toys will he like? The list goes on and one. But one of the most common questions puppy owners often ask is, “how big will my dog be when fully grown?”.

The best way to tell how big your dog will be is to do some simple calculations. These calculations will vary depending on whether your dog is a small, medium, or large breed. However, the average adult dog will weigh twice as much as they did 16 weeks. Take their weight at 16 weeks and double it. This is going to give you a rough estimate of how much they’ll weigh when fully grown.

In this article, we will discuss multiple ways to tell how big your dog will be. Keep in mind that no method is 100% accurate, but they will give you a good idea of what to expect.

Let’s start with the three primary factors that influence the size of dogs.

Just like with nearly every species, males are taller and carry more muscle. This doesn’t mean a female dog of the same breed can’t be larger than a male dog, but as a general rule, male dogs tend to be larger.

Something that’s rarely talked about when it comes to getting your dog fixed is that it can affect the height of a dog. Dogs have a hormone that is responsible for telling the bones when to stop growing. When a dog gets fixed, this hormone is canceled out. The result of this is a slight increase in height.

The last factor that influences the size of a dog is breed. This one should be obvious, but going back to the example above, you won’t see any fully grown 10 pound labs walking around.

There are two popular methods people use to tell how big their dog will be. Unfortunately, both of these methods don’t really tell us much about how much a dog will eventually weigh when they enter their adult years.

Myth #1: Look At The Size of The Paws 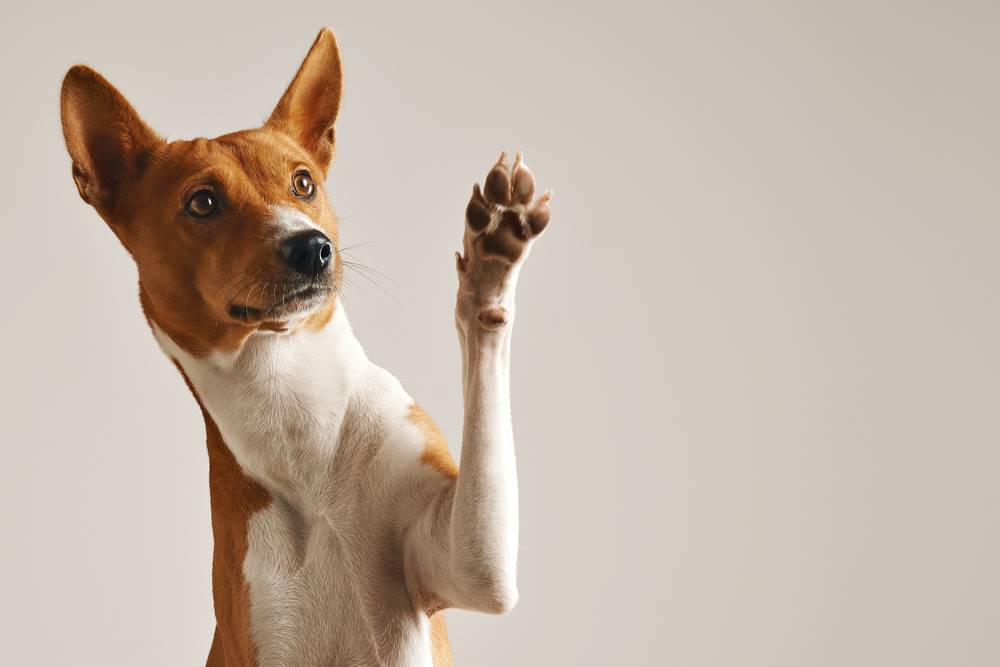 It seems like the first thing people do when they want to determine how big their dog will be is to look at the size of the paws. In theory, it makes sense. The bigger the paws are, the bigger the dog will be, right? Unfortunately, it doesn’t work like that.

The other reason this isn’t a reliable method is that some large breeds have small paws, and some small breeds have large paws. For example, Collies are a medium sized breed, but their paws are tiny. On the other hand, bulldogs are a much smaller breed but have huge paws for their size.

Because of growth spurts and differences in breed, trying to tell how big a dog will be based on paw size doesn’t work.

This one is half true. The more loose skin a dog has, the bigger they will get (they need to grow into their skin). However, the only thing this tells us is that the dog has more growing to do. We still have no idea how big their final height/weight will be.

This means that if your dog still has loose skin, they’re going to continue growing. But it doesn’t tell you how MUCH they’ll grow.

With those two myths out of the way, let’s go over the top methods to get a rough estimate of how big your dog will be when fully grown.

5 Methods To Tell How Big Your Dog Will Be

We are going to cover six ways to tell how big your dog will be. Again, these methods aren’t 100% accurate, but they’re reasonably close!

If you’ve met those two requirements, use the calculations below.

Once your puppy reaches the age of six weeks, you’ll want to see how much they weigh. Once you get their weight, double it and then double that number. For example. If the puppy weighs 1.5 pounds at six weeks, the first step is to double it, which is 3 pounds. From there you want to double that number, which is 6 pounds. This means that if a puppy weighs 1.5 pounds at six weeks, they should weigh around 6 pounds as an adult.

For medium breeds, you’ll need to wait until week 14. Once the puppy hits 14 weeks, take their weight and double it, then add half to the original weight and add all three numbers together.

For large breeds, you’ll need to wait about six months before you’re able to run a calculation. The good news is the math is simple. All you need to do is take their weight at 6 months and double it. For example, if the puppy weighs 40 pounds at six months, by the time they’re done growing, they should weigh around 80 pounds.

One of the biggest complaints we get with the calculation method mentioned above is about small dogs. The typical rule of thumb is to bring a new puppy home around the 8 weeks mark, so what are you supposed to do if you weren’t able to weigh the puppy at 6 weeks?

The good news is there is another formula you can use, but you’ll have to wait until the puppy is 12 weeks old to use it.

Take the puppy’s weight at 12 weeks and divide it by 12. Once you get that number, multiply it by 52.

For example, let’s say a puppy weighs 4 pounds at 12 weeks. The calculation would look like this:

Now we will multiply that number by 52.

The estimated weight of this dog would be 17.16

If you have a medium to large sized breed, you can use this formula. Unfortunately, it doesn’t work on small breeds because small breeds reach their adult weight much quicker.

Typically, an average medium to large breed adult dog will weigh twice what they weighed at four months. So take their weight at four months and multiply it by 2. This isn’t quite as accurate as the method mentioned above, but it’ll still give you a good idea.

Use a Breed Guide (Only Works For Purebreds) 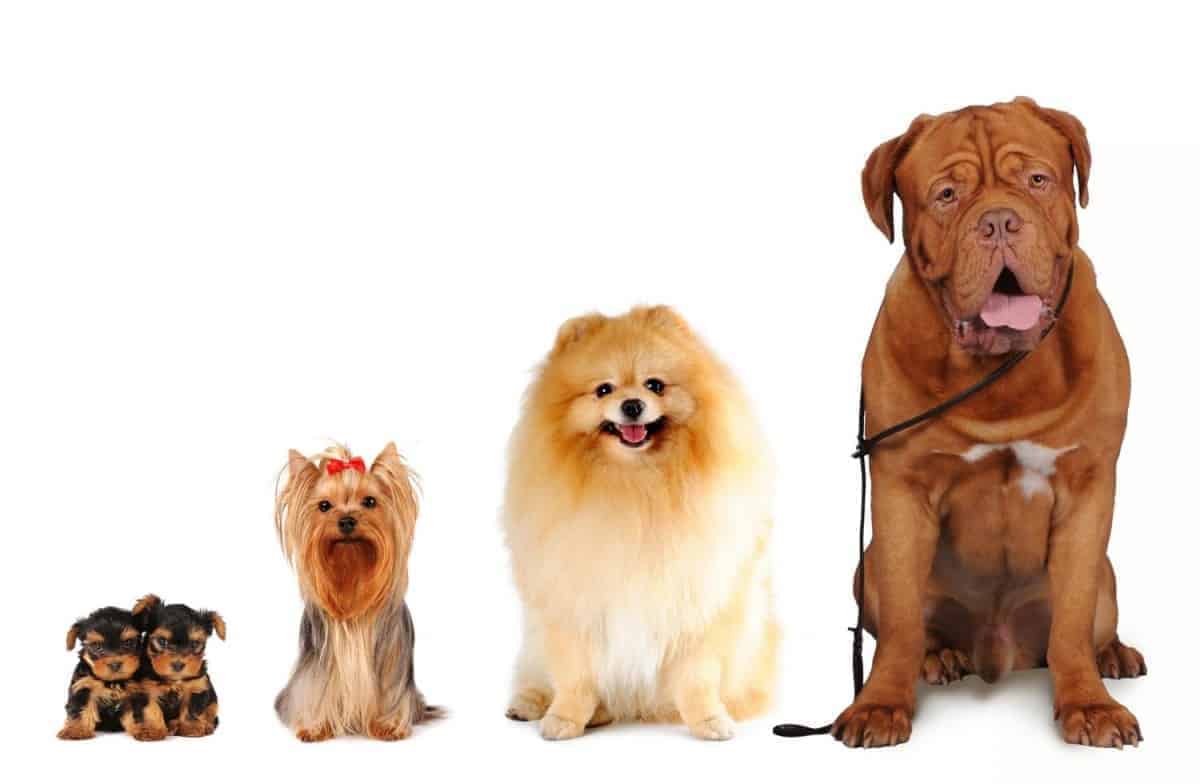 If you have a purebred, it’s easy to tell how big your dog will be by using a breed guide. The American Kennel Club has a great breed guide. Simply look up your breed to see the average size of that breed. A dog of the same kind will rarely weigh significantly more or less than the average.

Look at The Parents (For Mixed Breeds)

Talk To Your Vet

The last method is to simply ask your vet next time you take your puppy in. Vets answer this question all the time so they should be able to provide you a fairly accurate answer. Although for some mixed breeds, unless you know exactly what the mix is, the vet might even have trouble telling you what to expect. That’s why it’s helpful to see the parents.

How Long Does it Take For a Puppy to Be Fully Grown?

Now that you have an estimation of how big your puppy will be when they enter their adult years, you’re probably wondering how long it will take them to reach that weight.

Again, there are a lot of factors to consider. The most significant factor is the size of the breed. Small breeds stop growing much faster than large breeds.

Below we will go into the 5 stages of growth for puppies and provide guidelines on when to expect your puppy to enter each stage. But remember, these numbers are averages. Small dogs will be quicker, and large dogs may take a bit longer.

This stage lasts from birth to two weeks. During this period, the puppy is 100% dependent on their mother at all times because they can’t see or hear yet. They’ll drink milk every two hours, that’s about it!

During weeks 3-4, this is when the puppy will begin “acting like a puppy.” At this point, they can now see, hear, walk, wag their tails, and sometimes they can even bark.

This stage lasts from weeks 4 through 12. The puppies are still extremely dependent on their mother, but they’re also learning that it’s ok to be playful with humans and other dogs. Dogs that aren’t adequately socialized during this stage usually end up with social issues during their adult years.

This lasts from about weeks 12-24. Dogs are creatures of instinct, and this is where many of the instincts kick in. Stage 4 is called the Ranking Stage because that’s when dogs learn about dominance and submission. In other words, they begin learning about social order. This is also when your puppy should go through the teething process.

The final stage of development lasts until the puppy reaches adulthood. This usually happens for most dogs between 7-12 months. Again, it depends on the size of the breed. During this stage, the puppy will begin to go through puberty if they aren’t already fixed. They’ll also learn their place in the family “pack.” Once this stage is over, your dog is officially an adult!

At this point, you should have a good idea of how big your dog will be when it enters adulthood. This information is important to know because it makes an impact on what type of crate you should get, what kind of toys you should buy, and whether or not they’ll be an indoor or outdoor dog.

Any of the methods mentioned above will give you a reasonably accurate idea of how big your pup will get. Make sure you use that information to create a loving, fun, and comfortable environment for your new puppy.