One of the many things dog owners deal with is their dog’s nails. This can be a scary thing for both the dog and the owner. The fear of hurting the dog using traditional clippers lead many owners to go way too long between trims or resort to paying someone else to do it for them.

However, trimming your dog’s nails isn’t complicated, especially when you ditch the clippers!

There are three primary ways to cut your dogs nails without clippers.

Using a power nail file is the best option for most dog owners. They are safe and just about as fail proof as you can get. Manual nail files also work but take much longer.

However, before you begin trimming your dogs nails, there are a few things you need to do first.

Before Cutting Your Dogs Nails… 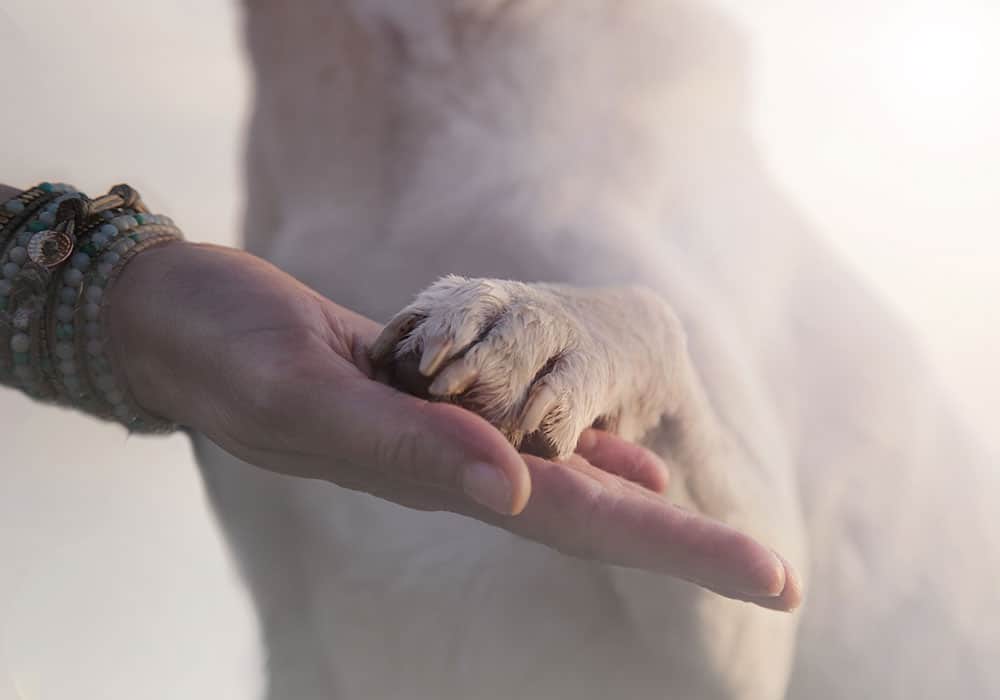 Most dogs aren’t used to having their paws handled. By taking small steps to get them used to their paws being handled, it will make the entire process of cutting their nails less stressful, and if done right, they will come to enjoy this pampering time. Take some time to massage their paws whenever possible. This should be a positive experience for them.

While giving their paws some special attention, use this time to reinforce that they have nothing to fear by giving them plenty of love, and even treats. The dog will associate good feelings with having their paws handled.

One of the hardest parts of cutting a dog’s nails is not being able to see the nail because of hair. After your pooch is used to their paws being handled take the opportunity, when necessary, to trim the hairs around the pads and nails of the paws. When the nails are clearly visible, cutting them will be a safer process. 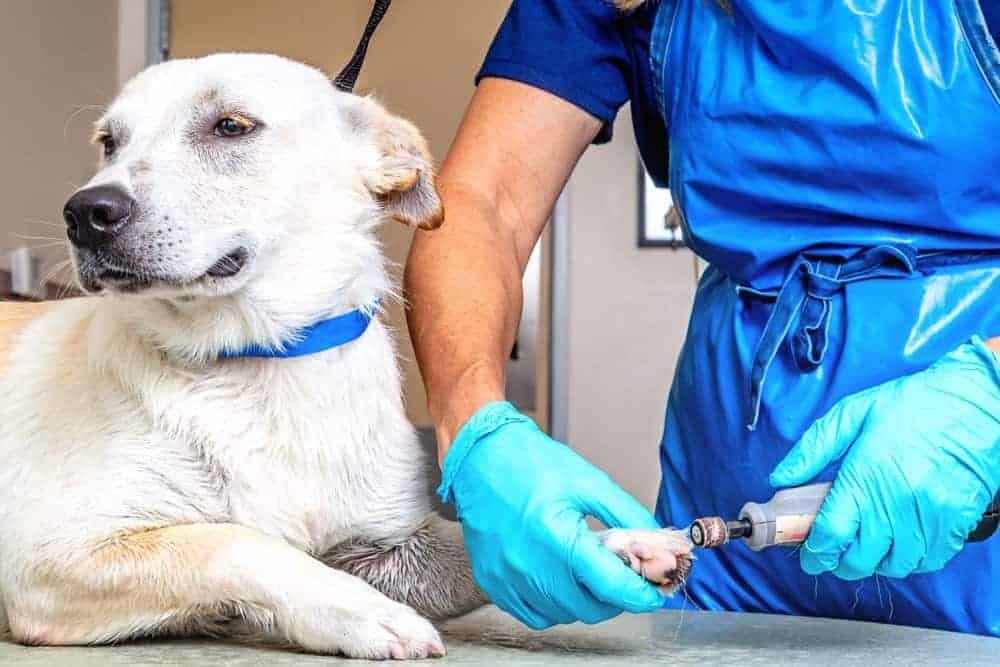 You may decide to use a power file specifically designed for dogs or a similar tool such as a Dremel Power Sander (which is popular to use on dogs). In either case, there are some steps that you must take to get the dog used to being around the tool well in advance of cutting their nails.

Getting Your Dog Comfortable With The Tool

The power tool is likely going to be a completely foreign object for your dog. Take some time just to have the tool around the dog. Sitting near them when you are petting or playing with them. Remember to use positive reinforcement whenever the dog does not stray away from the tool.

Leave the Tool off

Now it’s time to carefully bring the tool in contact with the dog. Use the tool to stroke the dog, keeping the power off. Again, make use of positive reinforcement to encourage the dog to make a connection between the tool and rewards/praise. Take your time, this is not going to happen in one sitting. The more time you take, the better the outcome.

Time to Turn the Power On.

Once the dog is completely comfortable with the tool, turn it on. If there is a low setting, use it. The dog is likely going to be timid and confused at the noise. Just as you did with sound off, get the dog used to the tool. Placing the tool near the dog, continue to use treats and praise to get them comfortable with the sound it makes.

The next step is to get the dog used to the feeling of the vibrations the tool makes. Go slow with this part. Using the tool much like you would a back massager, stroke the dog while giving praise and positive reinforcement. If the dog gets nervous or anxious, back off and try again later.

Time to Cut the Nail

After the dog has gotten used to the sound and vibrations the tool makes, it’s time to make the first pass at cutting the nail. It’s best to make slow, small passes with the tool rather than trying to take too much off the nail at one time. You may have to do this in multiple sessions at first.

As with anything new, a dog will be easier to handle if things are introduced slowly over a period of time. Take the time to go through each of these steps, and eventually, the dog will enjoy the nail cutting experience. 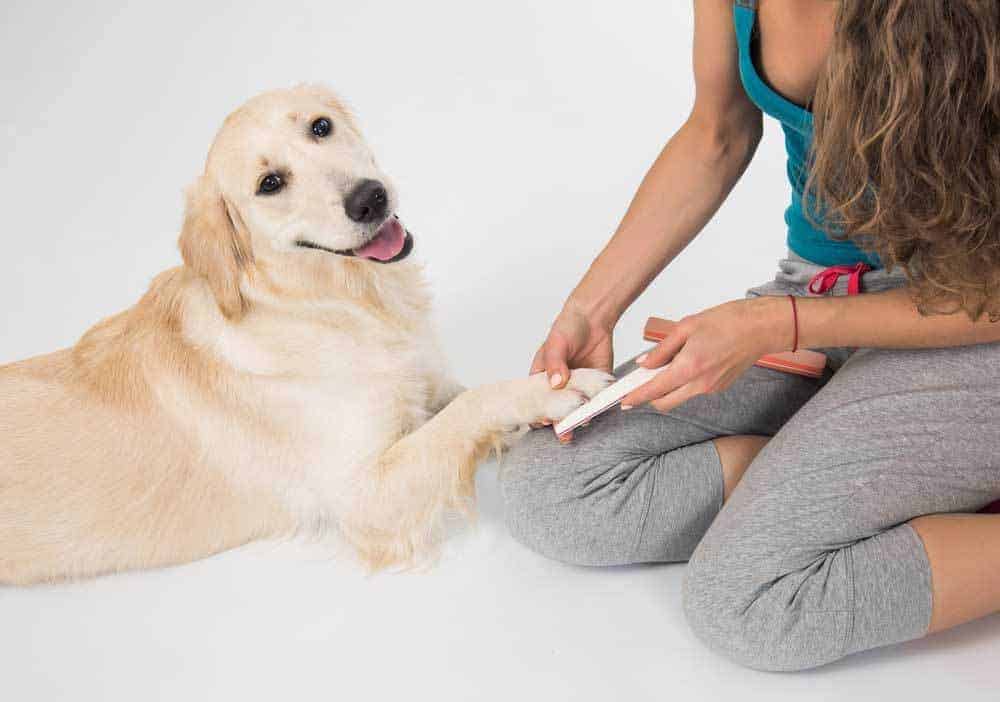 Sometimes a dog can’t handle a power tool, or a dog owner prefers not to use one or doesn’t want to buy one. In these cases, the next best thing is to use manual files and buffers to take the length off the nails. The steps are a little different, however, going slowly through each step will ensure the dog is at ease, and the whole experience is less stressful.

Unlike a power file, manual files work best when the nail itself is soft and slightly pliable. This decreases the pulling the dog may feel while the nails are being filed. Softening the nails can be part of a regular routine, using natural oils, such as Vitamin E or Coconut oil to soften the nail.

Just like human nails, a dog’s nail will crack and split if filed incorrectly. Use the file in one direction consistently to reduce the chances of damaging the nail. Begin with a coarse nail file and move to a finer file. Eventually, you may use a nail buffer to give the nail a smooth finish. This may be especially important if you have young children that can be scratched with sharp nails.

Do Not File Too Much

Underneath the nail is something called “the quick.” This is a highly sensitive and quick to bleed area. A good rule of thumb is to file the nail to just below the curve of the nail to prevent getting too close to the quick.

Once you get your pooch used to having their nails filed, make it a point to file their nails every few weeks. This will ensure that they stay used to the process. Even if you only need to make a few passes over the nails. And don’t forget to reward them for being good while you work on their nails.

The final method to trim your dogs nails without clippers is to take them on consistent walks on the concrete. Ideally you’d take your dog on enough walks outside that you never have to worry about cutting their nails. Think about it like this, do wild dogs (wolves, coyotes, etc), have someone trim their nails? Nope! They are naturally trimmed by spending time outdoors.

Of course, if you went too long without cutting your dogs nails, they’re probably too long for this to work in a timely manner so you’d be better off either using a power nail file or manually filing them. However, once you get the nails filed down, make it a goal to take your dog on enough walks outside so you don’t have to worry about cutting their nails for months to come.

Don’t Want to Do the Work? There Is One More Way to Keep A Dog’s Nails Filed

There is one tried and true way to keep a dog’s nails from becoming overgrown and not having to worry as much about regular filing or trims. Take your dog for a daily walk on concrete or pavement streets. This will naturally file the nails as they walk, keeping them a comfortable length with a bonus of exercise for the pooch.

What Happens if I Cut Into The Quick

Just about every dog owner that cuts their dogs nails has been guilty of cutting a little too much. When you cut into the dogs quick, you’ll notice some blood coming out of the dogs nail. Yes, this does mean your dog is in a bit of pain, but the pain will go away quickly. The best way to stop the bleeding is to use styptic powder. Just pour a small amount of styptic powder on your hand and press the bleeding nail into the powder for about one minute.

What if I Don’t Trim My Dogs Nails At All?

If you do this, your dog is going to be in a lot of pain (unless you take them on enough walks outside to keep the nails trimmed naturally). Not only will this hurt their paws, but it can also cause hip dysplasia to develop because your dog now has to adjust their normal walking gate to reduce the pain in their paws.