As you take your dog for a walk, do you ever wonder if he sees the world as you do? Does he see the flowers, the houses, and all the colors that make neighborhoods come to life? For a time, it was believed that dogs could not process color and were completely colorblind. Seeing the world in small doses of grey and white. Nowadays, we are aware that our dogs do see shades similar to the way we do, just not as good.

Dogs can see a variation of three different colors

Understanding what colors your dog can or cannot see will help you with deciding what toys to buy for him, blankets to get for his crate, and even help with training him.

Recent research shows that dogs have similar vision to humans that have red-green color blindness. The world isn’t completely black and white to them, they just don’t see as vibrantly as we do.

While humans definitely have the edge in the color department, dog’s eyes have other unique features. When comparing the human eye to that of a dog, there are some significant differences. Dogs have excellent vision in low light situations while humans have trouble seeing in the dark. The significant difference between a dog’s eye and humans all comes down to the retina.

In the retina, dogs have what is called a tapetum. The tapetum catches any light that was missed and sends it back to the retina — giving their eyes a second chance at absorbing any possible light. This is the cause of the glowing when light gets shined close to your dog’s eyes.

Now that we know some of the main differences, let’s take a look at the colors your dog actually does see.

We can’t blame him for coming to this conclusion. He did the best he could with the science and technology from 1937. However, as science and technology developed, so did our understanding of how dogs eyes work. It turns out dogs see colors just as humans do. But while humans see all the vibrant colors of this world, your dog sees only a few. Dogs can only see about one-tenth of the color’s humans do.  As stated above, the colors they see are mostly blends of: 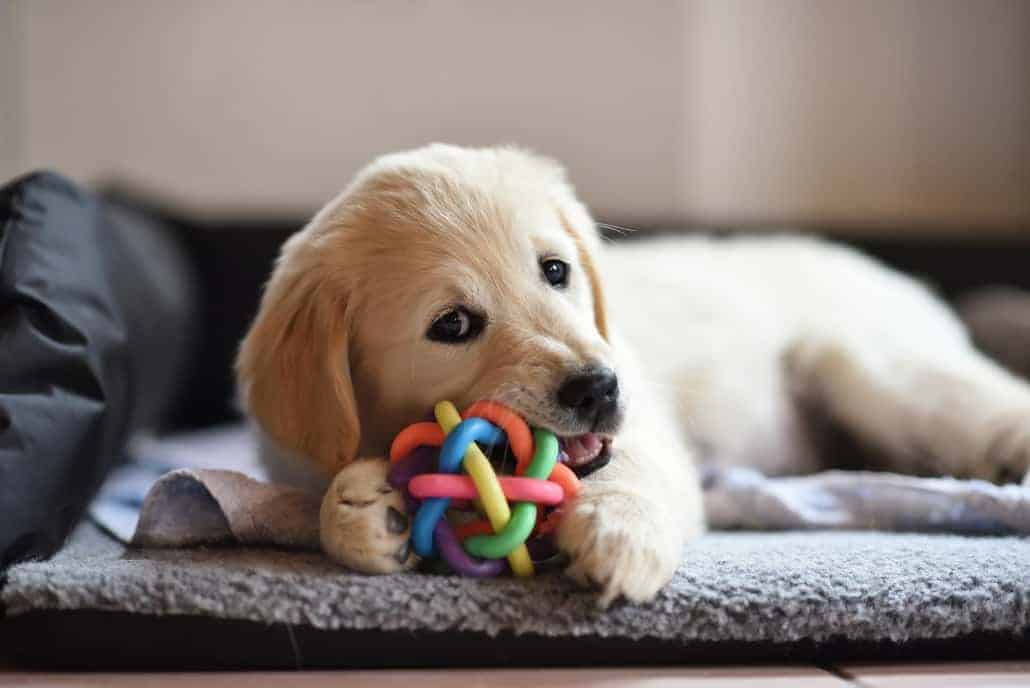 When you go to the pet store, it is common to see a lot of toys that are shades of pink and red. If your dog can’t see these colors, why do they make the toys in those shades?

Good question. It’s because they aren’t selling toys to your dog, they are selling them to you. You can see red. In fact, reds actually stand out to human eyes.

When you are shopping for toys that your pup will love, get him something green, blue or yellow. As long as it is in one of the colors mentioned above, you can be sure that your dog will recognize it.

If you turn on any dog competitions, you will notice that most of the obstacles are shades of yellow and blue. This helps them navigate the equipment better as they can actually see it.

Keep this in mind when you are shopping for sheets or blankets for your dog as well. The more colorful you make your dogs world, the more he or she will appreciate it.

Dogs Other Senses Make Up For Lack of Color 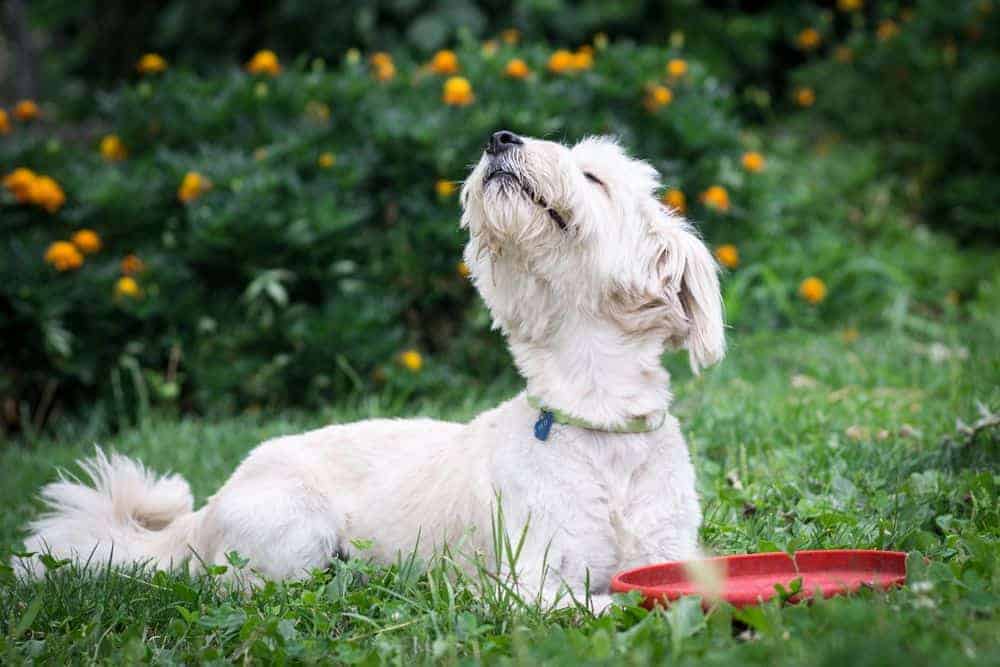 It’s common to be walking down the street and smell the beautiful scent of steaks sizzling on one your neighbor’s grills in the backyard. However, if you had the smelling power a dog possesses, you would be able to pick out what seasonings they put on it, what the side dishes are, and what they used to marinade it in. That would be great.

Dogs also have the edge over humans in the hearing department. When you see your dog cocking his head to the side, it could mean that he is zeroing in on a sound way off in the distance.

Dogs can hear almost four times better than humans. They can pick up higher pitches than we can, and their ears act as big nets gobbling up the sound waves. Dogs can also hear out of each ear independently. So, he could be listening to you yell at him for chewing up the pillows with one ear and hear someone walking up to your door with the other. Pretty cool, right?

Dogs Have The Peripheral Edge

Along with having better night vision, dogs have much better peripheral vision than humans do. The increase in peripheral vision is simply because of eye placement. Since the eyes are on the side of the head instead of in the middle (like humans), this allows dogs to see and average of 250 degrees instead of the 190 degrees that us humans can see.

How Can We Possibly Know What Colors Dogs See?

This is a really good question! It’s not like we can simply ask them “Hey Fido, do you that red toy over there?”.  That’s why when doing tests on dogs, you need to think outside the box.

The way researchers went about this test was to show dogs three circles at the same time. Two of the circles were the same color and one was different. They trained the dogs to select the circle that was a different color. If all three colors looked the same to the dog, this showed the researchers that the dog can’t see either of those colors. 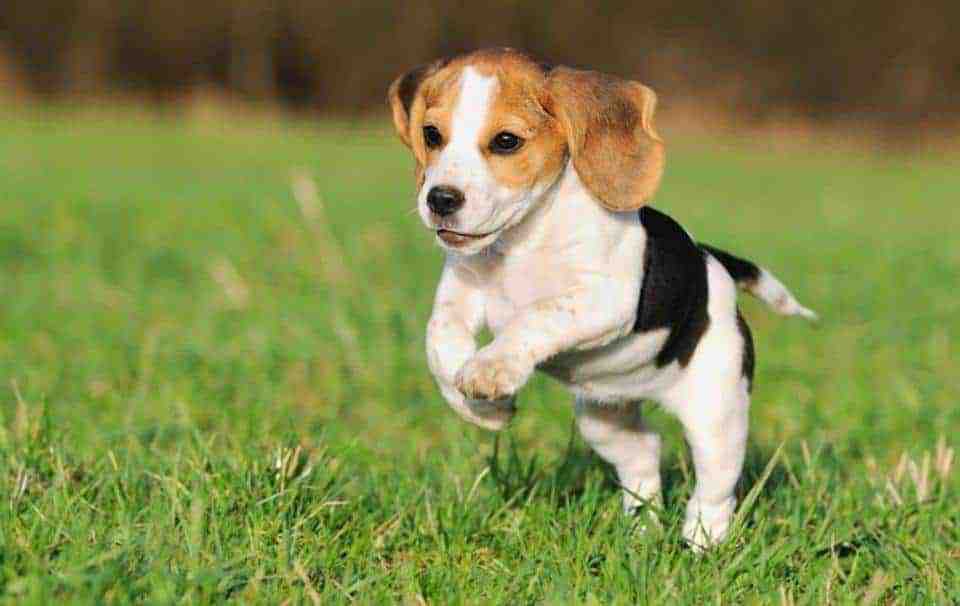 At the end of the day, your dog’s vision isn’t all that different from yours. While you can see many shades of colors, your dog only sees a few. Your dog can hear a lot better than you as well as pick up scents that you couldn’t detect on your best day. So, while you excel in some areas, your dog has other senses that can make up for it.

As a dog owner, you want to give your dog the happiest life possible. You want to fill their life with as much color and joy as you can. This is why knowing what colors your dog can see is an important first step. Don’t get swindled into the red chew toy at the pet store. They are only trying to attract you, not your dog.

Take your dog to the park and toss a tennis ball around with him. The light green ball, in the green grass, with the blue skies and sunshine, will make for a colorful day.