How Do I Show Dominance Over My Dog? [Without Being a Bully]

There’s a lot of myths out there when it comes to dog ownership. One of the biggest myths is that when you get a dog, you need to show dominance over it early on. That way, they know who the alpha of the pack is.

The truth is most dogs are NOT born as natural leaders and will automatically look to you as the alpha when you bring them into your home. This means that with most dogs, you don’t need to do anything to show dominance, all you need to do is love on them and take care of them.

With that said, some dogs are naturally born leaders, and unless you show them you’re alpha, they’ll continue to push the boundaries with you and challenge your leadership. The good news is that humans can still have a great relationship with dogs that naturally lean toward alpha, there are just a few things you need to do to show dominance over them

Showing dominance over a dog breaks down into two categories.

Rules include things such as not allowing them to bark out the window, pull on the leash, or go up on the couch. Body language includes things such as making eye contact and not breaking until they look away.

We will go into more detail on the two categories mentioned above shortly, but before you do that, let’s get a clear definition of what dominance actually means.

Dominance seems to have a negative connotation associated with it. Being dominant over a dog makes it sound like you have to bully the dog and treat it horribly until the dog understands that you are the master.

If that’s your view of dominance, let’s quickly change the definition. Instead of talking about being dominant, view it as being alpha. Although dominance and alpha go hand in hand (alpha dog will always be the one to discipline), alpha also implies trust from the rest of the pack.

You can be dominant over a dog but not have their trust. That’s not what the goal is. The goal is to have your dog view you as the leader BECAUSE they trust you, not because they are afraid of you.

This is important to keep in mind when it comes to displaying signs of dominance over your dog. You don’t want to scare them into obedience. You want them to obey because they trust you.

Why Being Alpha is Important 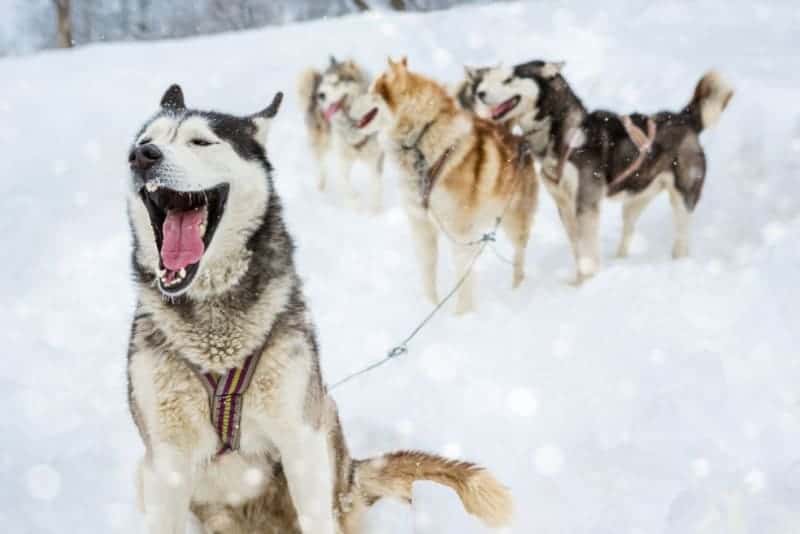 Dogs are creatures of instinct, and one instinct they’ll always have is to either look for an alpha or be the alpha. They’re either going to find someone to follow, or they’re going to look for others to follow them.

Since you’re reading this article on how to show dominance over a dog, there’s a good chance you have a dog that wants to be alpha.

Here are some potential problems when your dog does not view you as the leader/alpha of the house.

A dog that views themselves as dominant over you will also see it as their job to discipline you when you do something they don’t like. For example, if they’re eating food and you take their bowl away, they might bite you. You should always be able to take their food away at any point without them growling or snapping at you.

A dog that views you as master will accept guests into the house as long as you accept the guest into the house. A dog that is alpha believes it’s his job to decide who can and can’t enter the house. If a guest enters a house and for whatever reason the alpha dog doesn’t like the person, the dog may become aggressive.

The list of reasons why it’s essential to be the alpha could go on and on. That’s why it’s so important to change your dog’s perspective on the order of the pack.

Testing Vs. Challenging – An Important Distinction

In the section below, we will begin talking about to show dominance over your alpha dog to change their perspective, but before we do that, we need to make one crucial distinction regarding testing vs. challenging.

Just because a dog is having behavior issues doesn’t mean they are trying to be alpha. It could mean they are just trying to test the boundaries to learn what they can and can’t get away with.

Think about it in terms of toddlers. Toddlers will begin intentionally breaking the rules to see how far they can “push” the rules before they get in trouble. Dogs will do the same thing. If you just brought a new dog into your home, they might be pushing the rules a bit to see what they can get away with.

It’s important to make the distinction between the two before you begin dominance training because if you do dominance training on a dog that doesn’t want to be alpha, it can cause serious trust issues down the road. The last thing you want is for your dog to only obey you because they’re scared of you. Again, the goal is to get them to obey because they trust you.

Show Dominance By Creating Rules and Being Consistent

If you decide your dog is trying to be dominant over you and not just trying to test the boundaries, it’s time for dominance training.

The first factor in showing dominance is to have house rules and to not let your dog get away with breaking the rules. Remember, right now the alpha dog views the house as theirs. They think they make all the rules. You need to change their perspective by showing them you’re the one creating rules for them, not vice versa.

The house rules are up to you. Here are a few examples:

Those are just a few examples of house rules for dogs. You’ll want to establish your house rules and make sure you stay consistent with them.

The only way for an alpha to learn that it’s not their house is to be consistent with these rules. If you allow an alpha to break the rules every once in a while, they may think they’re becoming dominant again.

It may take some time for your dog to learn the house rules, but after a few months, they should have it down.

Out of all the body language rules, this one is most important. Next time you give any command to your dog, whether that be “sit,” “no,” “off,” or anything else, say it with a calm, authoritative voice while making eye contact.

At this point, most alpha dogs will stare back at you. Don’t be the one to break eye contact. Continue holding it until your dog looks away.

If your dog doesn’t have an alpha mentality, it’s ok to let them walk in front and explore the world. However, when training your dog that you’re the leader, you need to lead the way.

Don’t Let Them Eat Without Permission

In the wild, the alpha is the one who controls the resources and makes sure the pack is fed. They need to know that it’s now YOUR job to make sure everyone is fed.

When you feed them, make them wait to eat until you give them permission. It can be something as simple as “sit,” then “eat.” Teaching your dog that they need permission from you to eat will make them realize feeding the pack is your responsibility, not theirs.

Be Assertive With Words and Tone

An alpha leader stays calm in dangerous situations. If you constantly yell at your dog, all they’re going to see is nervous behavior. Dogs can easily sense nervousness, and when an alpha senses nervousness, it makes them view you as a follower in the pack, not a leader. Be calm and assertive when giving a command to your dog.

The Lies of Alpha Rolling

Before we end this article, I’d like to talk about a method called “alpha rolling” that’s becoming popular.

Alpha rolling is when you physically force your dog onto their side or their back. The goal is to force them into a submissive posture and hold them there. The theory is that this shows them you’re the dominant one and leader of the pack.

Does this work? Possibly.

Should you do it? NO

Alpha rolling can create more behavioral problems. A study was done in 2009 by the Journal of Applied Animal Behavior. The results showed that Alpha Rolling made dogs feel scared and ashamed because it’s not natural behavior. This means that even though they may have viewed the person who forced them into an act of submission as the alpha, they are afraid of the alpha, which ruins the “best friend” relationship between man and dogs.

The methods we discussed above are much better to assert dominance over your dog while still maintaining a level of trust and love.

It’s All About Trust

As long as your dog knows you’ll provide them with a comfortable space to live and keep them alive, they’ll slowly begin to view you as the alpha. Dogs that are prone to becoming alpha do so because they don’t trust you enough to get the job done.

Build that level of trust with your dog and their negative alpha behavior will disappear before you know it.