Dogs can be strange creatures. Typically, when a human gags multiple times it’s followed shortly by throwing up. However, that’s not always the case with dogs. If your dog is gagging but isn’t throwing up, it’s more common than you think.

…but that doesn’t change the fact that you want to help your poor furry friend! In this article, we are going to discuss what could be causing this gagging issue and how to help.

But first, a quick disclaimer:

I’m sure the main question you’re asking is whether or not this is cause for alarm. Chances are good it’s not cause for alarm, but considering there’s also a chance it can be serious, it is probably best to take your dog to the vet to be safe.

With that quick “disclaimer” out of the way, let’s talk about what could be going on. 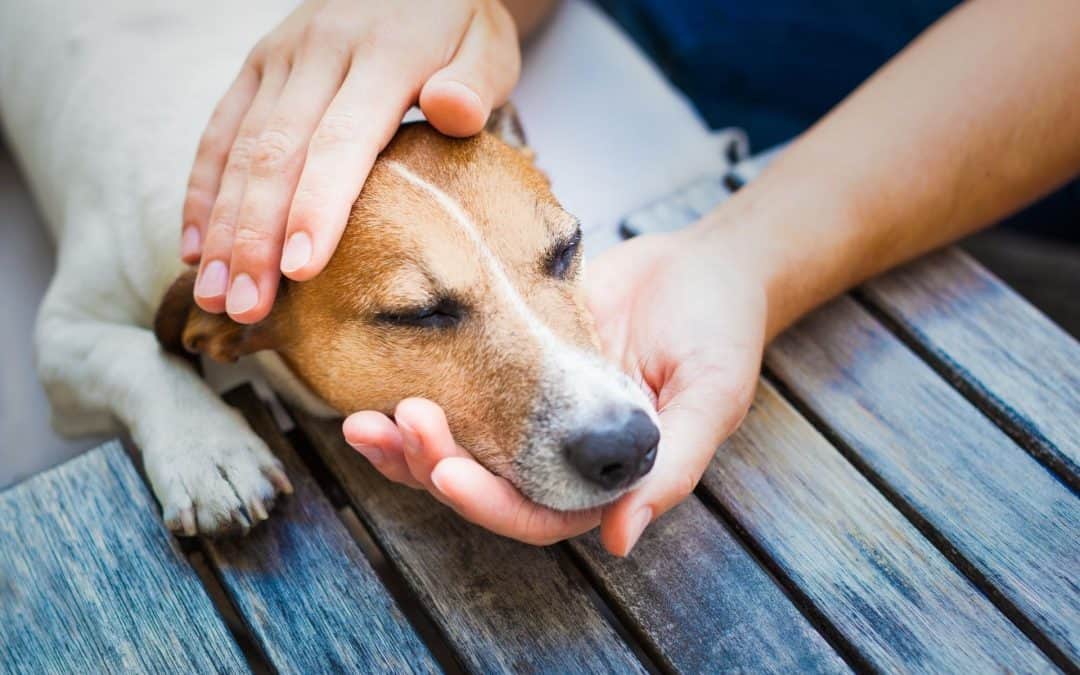 When a dog is gagging but not throwing up, this is called retching. In other words, an unsuccessful attempt at vomiting (or vomiting without results).

It’s important to observe your dog carefully to see if they are retching or if they are merely coughing. The reason for this is because the two can sound similar, but they often have many different causes.

Is it Occasional or is it Consistent?

The next thing you’ll want to decide is if it’s occasional or if it’s consistent. If this only happens for a few minutes every couple of weeks, it’s most likely not a cause of concern. However, if it’s a daily issue or has been going on for over 10 minutes straight, it could be a more serious issue.

So what exactly should you be looking for?

The first thing you should do is listen to the sound. Coughs are usually much louder than gagging. You should know from your own experience the difference between the sound of a cough and the sound of a gag.

If you can’t tell by the sound, the next thing to look at is the stomach. When gagging, the stomach on your dog will quickly contract and suck in. They will also round their backs and tilt their head down.

Ruling Out The Three Biggest Concerns

Once you’ve confirmed your dog is gagging instead of coughing, it’s time to rule out the three biggest concerns that could be life-threatening

It’s important to stay calm. There’s a reason why on an airplane you’re told that in the event of an emergency, place your oxygen mask on BEFORE helping your child put on theirs.

If you freak out your rational decision making goes right out the door. It also adds to the stress level of your dog because dogs feed off humans body language. The best way to keep your dog calm when they’re gagging is if you stay calm.

Check For Foreign Object in Mouth/Throat 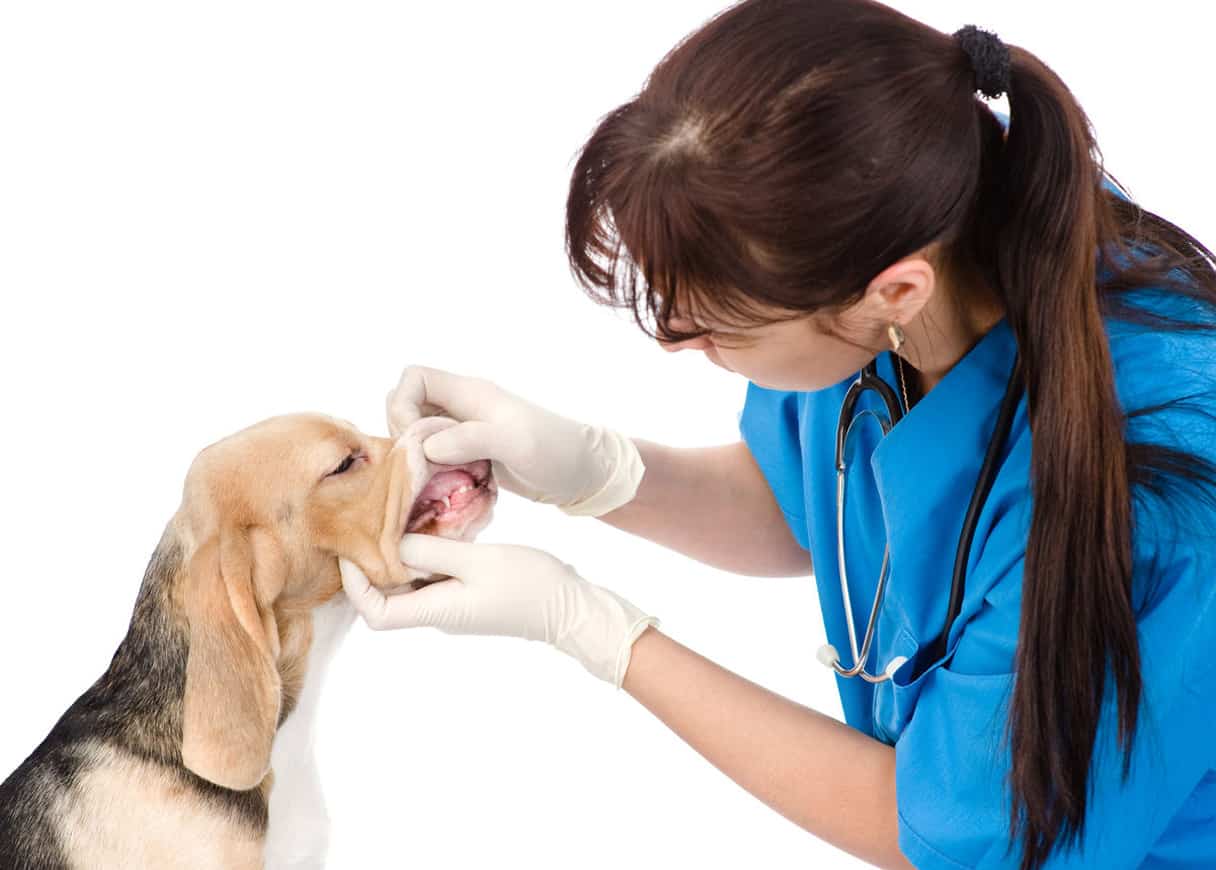 Before checking for anything else, you want to check the mouth of your dog to see if they are choking on anything. Feel under the tongue, between the gums, and get a glimpse at the throat. Dogs tend to eat things they shouldn’t eat, and oftentimes these small foreign objects can get stuck in the throat.

If you notice your dog is choking, you will want to rush them to the vet. If there is someone with you, have them perform the dog version of the Heimlich maneuver while you are driving.

Here’s a great video showing how to properly perform the dog Heimlich maneuver.

Check For Symptoms of GDV (Gastric Dilation and Volvulus)

If your dog is not choking on a foreign object, the next step is to look for signs of GDV. GDV stands for Gastric Dilation and Volvulus. We won’t go into detail on what that means in this blog post, but for now know it is VERY serious and if you suspect your dog might have it, you should get them to the vet as soon as possible.

Although this isn’t quite as serious as the first two, it’s still a reason to bring your dog to the vet.

Here are the symptoms to look for:

If any of these symptoms are present with the retching, you should take your dog to the vet and see if they have kennel cough.

Hopefully all that GDV and choking talk didn’t scare you too much! Chances are good the gagging is NOT that serious, but on the off chance that it is one of those two areas of concern, it’s important to know what to look for.

There’s a MUCH better chance the cause is one of the reasons mentioned below.

Is Your Dog Old?

The aging process is a beautiful thing, isn’t it? (read with sarcasm). As you might already know, as humans get older we tend to produce more mucus and phlegm. I know, sounds yucky, but it’s true.

It’s also true in dogs. The older your pup gets, the more mucus and phlegm they will produce. What does this mean? It means that to expel it, they may need to dry heave and gag until they move it into a place where it’s no longer uncomfortable. 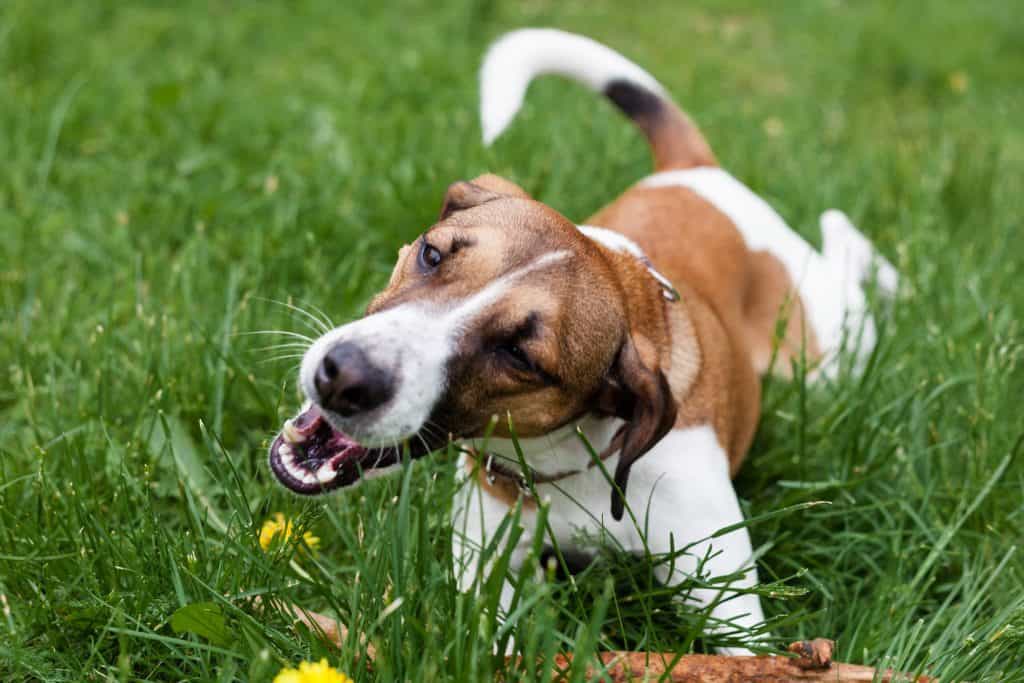 We have NO idea why dogs eat grass. There are numerous theories out there, but none of them have been proven.

One thing we do know is that eating too much grass can cause your dog to dry heave and potentially vomit. So if your dog is gagging but not throwing up, think back and ask yourself if they have been eating grass lately. If they have, there’s a good possibility that is the cause. There’s nothing to be concerned about as long as it doesn’t last more than 10-15 minutes straight.

They Have a Stomach Virus

Most stomach viruses will cause vomiting (and usually diarrhea), but when your dog gets a stomach virus, they lose their appetite (just like humans). If they stop eating, they won’t have anything in their stomach to vomit which will result in constant gagging without actually throwing up.

If you suspect this might be the case, make sure you get your dog to drink some water. If they refuse, try sweetening it up by placing a little flavor in there for them. If they still refuse to drink any water, you’ll need to bring your dog to the vet to prevent dehydration.

As you can tell, there are a lot of potential reasons your dog might be gagging but not throwing up. Most of them are not cause for concern, but there are a few causes that can be life-threatening.

As always, if you aren’t sure it’s best to take your dog to the vet to be on the safe side. The last thing you want is for something to happen to your dog because you thought it wasn’t anything serious.