Puppies bring so much unexplainable joy and love into our lives. There’s nothing quite like watching a puppy play and then cuddling up with them after that play session. As much joy puppies bring into our lives, they also bring a lot of worries. One of the most common questions we get from worried puppy owners is “My puppy is breathing fast when sleeping, is this normal?” 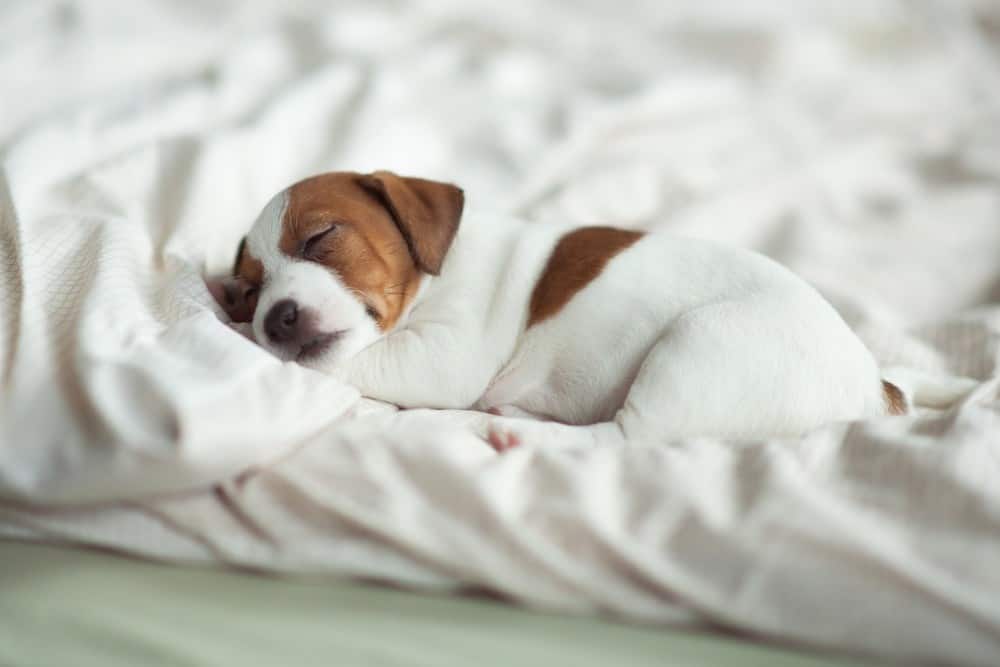 So do puppies breathe fast when sleeping? Yes! This is completely normal and usually nothing to be worried about. However, some medical conditions can cause your puppy to breathe more quickly than they should. We will go over those at the end of this article, along with the symptoms to look for. But for now, just know that a puppy breathing fast during sleep is completely normal.

It’s also important to remember that puppies breathe faster than adult dogs, so what might seem like rapid breathing to you could actually be normal breathing for a pup.

If you’ve already done some research on this topic, you’ve probably seen a lot of articles talk about getting your puppy’s respiratory rate. Do you really need to do this? We believe in keeping it simple. You should be able to tell if your puppy is breathing fast without counting their respiratory rate. Let’s leave that for the vet.

Why Do Puppies Breathe Fast When Sleeping?

There are several non-medical reasons a puppy breathes fast during sleep. Below are the six most common.

This is by far the most common reason a puppy breathes fast when sleeping. In fact, I’d say in about 90% of cases, the puppy is breathing rapidly during sleep because the body is developing.

Sleep is when the body quickly grows. Without getting too nerdy on you, in order for the body to properly develop, it needs a high supply of oxygen. The body will naturally increase the breathing rate to supply more oxygen. This is true in humans as well. You’ll notice babies go through phases of sleep where they breathe rapidly. That’s because the body is quickly developing.

Most dog owners have seen their dog “running in their sleep.” Puppies do the same thing. This usually happens during REM because that’s when your pup is dreaming. If you notice little twitches in your puppy while they’re breathing fast in their sleep, they are most likely dreaming about chasing something or running away from something. No need to wake them up, let them enjoy their dreams…hopefully it’s a good one!

Over Exerted During Play

Puppies have an incredible ability to fall asleep almost instantly after playtime (a superpower I wish I had!). In fact, they can fall asleep before they have a chance to catch their breath. If your pup just got finished with a play session, they might be breathing fast during sleep because they’re still catching their breath. This could last for about 10 minutes if it was an intense play session.

Since dogs only have sweat glands on their paw pads, the best way for them to cool their body temperature is by panting. Naturally, panting causes a dog to breathe fast. If your dog just got done playing out in the sun, or if it’s hot where they are trying to sleep, the quick breathing could just be their body trying to cool off.

Fear and stress will cause a dog’s heart and respiratory rate to increase. When you bring a puppy home for the first time, they’re around completely new people in a completely new house. On top of all that, they don’t have their mom who has been their safety net the past few weeks.

You can imagine how much stress and fear this would place on a new puppy. Thankfully, dogs live in the moment, and after a few days, they’ll forget about the past and view your family as their new pack.

However, until the fear and stress go away, they’ll probably be breathing fast when awake and when sleeping.

Uncertain About The Crate

This goes along with stress/fear. A puppy that isn’t used to the crate might be scared and stressed because they feel trapped. A dog’s number one survival instinct is to run. When you crate your dog, you’re taking away their ability to run. That fear then carries over into their sleep and affects their dreams.

What Should You Do?

In most cases, the answer to this question is “nothing.” It’s completely normal for a puppy to breathe fast when sleeping. The last thing you want to do is wake them up while their body was recovering and developing.

However, if you think they’re breathing rapidly because they’re stressed, over-exerted, or overheated, here are two things you can do to help:

Give Them Water Before They Fall Asleep

Water is an essential part of cooling the body temperature of a dog. It will also help the body relax after a hard play session.

Remove The Source of Stress

This isn’t always possible, but if you know what is stressing your dog (like the crate), it’s ok to remove that source for a few days until your pup gets adjusted to it.

There are a few medical reasons that could be causing your puppy to breathe rapidly. However, most of these conditions will cause your dog to breathe quickly at multiple points during the day, not just when they’re sleeping. Unless they’re also breathing rapidly while sleeping, you probably have nothing to worry about.

When trying to determine if something is medically wrong with your pup, ask yourself the following questions:

If you answered “no” to the above questions, there’s a good chance everything is normal. If you answered yes to one or more of the questions above, you should consider scheduling an appointment with the vet.

Asthma in dogs is the same as humans. This occurs when something blocks or narrows the airway, making it difficult for your dog to breathe. When a puppy is having trouble breathing, it will appear as though they are breathing fast.

Kennel cough is a canine respiratory infection that is highly contagious for dogs. Kennel cough causes the upper airways to constrict, which makes breathing difficult.

When a dog gets heart disease, one of the first symptoms is rapid breathing or difficulty breathing. This is quickly followed by a variety of other symptoms such as lethargy, reduced appetite, and coughing.

Tachypnea is the general term for fast breathing in dogs. There are a wide variety of issues that can cause it, but generally speaking, the reason remains unknown. If your dog only breathes fast while sleeping, they DO NOT have tachypnea.

Again, it’s rare that any of these would cause rapid breathing solely when sleeping.

Dogs that have a short snout (brachycephalic dogs) typically have more breathing issues than dogs with longer snouts. A classic example of this would be a bulldog. When you lay next to a bulldog, you’ll hear very heavy breathing. When they go to sleep, their respiratory rate usually goes up. If you have a brachycephalic dog, that is likely the reason for fast breathing when sleeping.

Video For The Vet

As you can tell, there’s a good chance your puppy’s quick breathing is completely normal. However, if you’d rather play it safe and take your dog to the vet to find out, it’s a good idea to get a video of the fast breathing so the vet can see first hand what you’re talking about.

It’s hard for a vet to diagnose an animal when they can’t see the problem first hand. If you take a video, your vet will be able to examine the video and let you know if it all looks normal or if he thinks something might be wrong.

It can be scary to watch your puppy breathe fast when they’re sleeping, but unless they’re showing any of the signs and symptoms mentioned above, this is completely normal and nothing to be scared of. So let your little pup enjoy their nap. Hopefully they’re having happy dreams!